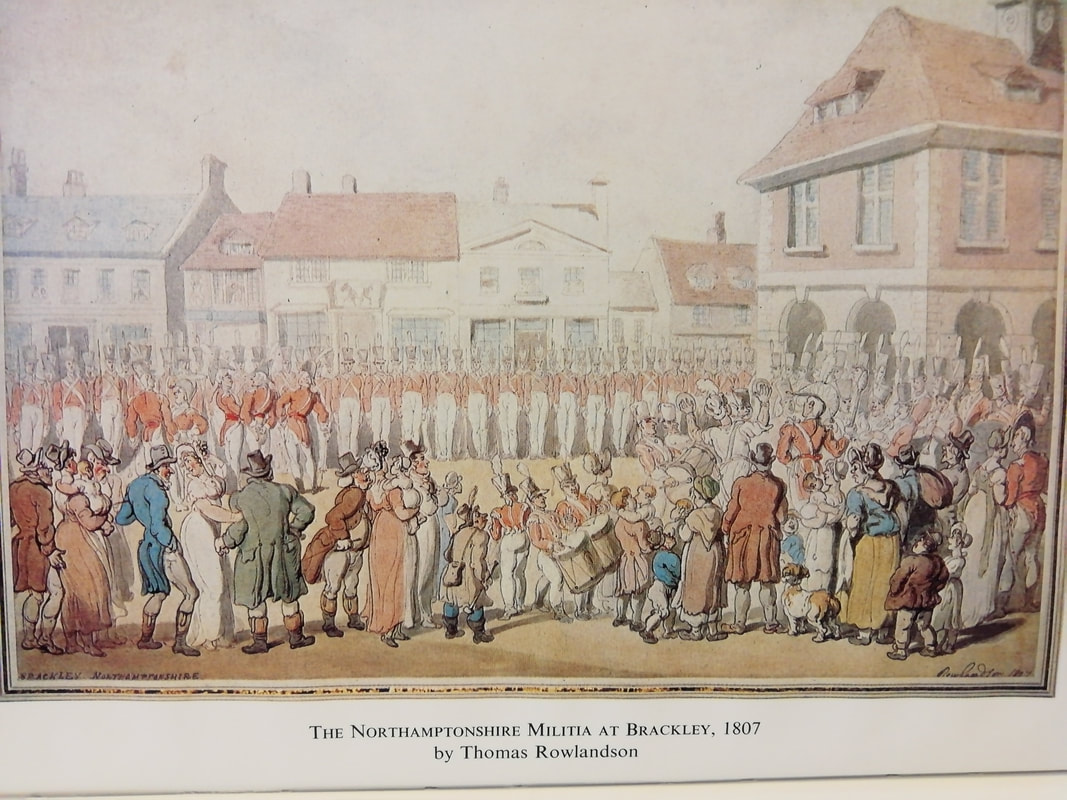 The recruiting of militiamen was governed by the Militia Act of 1757 which stipulated that each area had to call-up, equip and train a certain local quota of men to defend Great Britain against invasion or rebellion (Northants had to recruit around 600 men across the county in 1757). Each man had to serve a minimum of three years part-time service which involved a full 28 days a year full-time military training away from home and family, whilst living in a military camp. Local militias were exempt from military service overseas. The men who served in these militias were chosen by ballot, and were aged between 18 and 45 years old. There was no medical or fitness test as is common today, with the assumption of the vigour of youth being present, or the experience and reliability that comes with age. It was common for rich men, however, to ‘pay’ to have their place taken by another (usually ‘poorer’) man. This is how the well-off paid to avoid their military duty. A chosen person could be exempted on the grounds of poverty and for having three or more children born in wedlock (this was reduced to one child in 1786). Peers of the realm, clergymen (including dissenting ministers), articled clerks, apprentices, seamen and parish constables were exempt a priori. I would like to make a special mention of Mr Robert Collinge of Marholm (which is 12.2 miles east of Duddington) who kept a public house. He was chosen by ballot and refused to ‘pay’ another man to do his military duty for him. He turned-up to take his place in the military frontline despite being described as possessing ‘remarkable crooked legs’. This disability did not entitle this brave man to an exemption, and I think that this is an example that must be respected today. Although constables were exempt from direct service, nevertheless they were tasked with drawing-up the lists chosen by ballot, and processing the men selected. Each man had to give his name and occupation as a means to be officially inducted into the militia, but there are examples of men refusing to give their names and consequently not being confirmed as militiamen. This appears to be something of a legal loophole not known or used by many in a population that had a very low literacy rate.

Below are the scanned pages from two very important publications of the Northampton Record Society pertaining to the formation and staffing of local militias in the UK during the latter part of the 1700s (18th century). The first is entitled ‘A Northampton Miscellany’, Edited by Edmund King, and published by Butler and Tanner in 1983, where I have included the introductory chapter for the Nassaburgh Militia (1762), as this serves as an excellent (general) explanation of this unique (local) British military formation. Furthermore, in the area of ‘Helpston’ (which is situated 8.6 miles northeast of Duddington), we find one ‘Robert Wiles’ (described as a ‘sandman’) and one ‘John Wiles’ (described as a ‘servant’ suffering from ‘lameness’) - in the 1762 militia list. The second book is entitled ‘Northamptonshire Militia Lists – 1777', Edited by Victor A Hatley. I have referenced the entire chapter dedicated to the militia recruited in the Willybrook Hundred – which includes Apethorpe, Collyweston, Cottersock, Duddington (which recruited 32 men in 1777), Easton on the Hill, Fotheringhay, Glapthorn, Kings Cliff (which recruited 79 men in 1777), Lutton, Nassington, Southwick, Tansor, Woodnewton and Yarwell. ‘George Wyles’ is recorded as being a ‘taylor’ in Duddington’s 1777 militia list. We believe this is my direct relative – the son of James Wyles (1701-1785) and Catherine Wyles (1703-1785) - who was born in 1749. This means that George Wyles was 28 years old when called-up for militia training in 1777. Over in Kings Cliff, the ‘William Wyles’ listed is an older cousin of George (with his name misspelt ‘Whyles’).  William was baptized in 1737, which means he was 40 years old when called-up for militia training in 1777. William Wyles was a very successful baker and this fact was even mentioned on his gravestone in Kings Cliff. Residing in the Brampton Ash area of the Corby Hundred is listed one ‘John Wiles’, who is recorded as a ‘carpenter’. (Nearby Brigstock lists two men - ‘Samuell Wills’ [labourer] and Lewis Wills [farmer]). Finally, in the Great Addington area of the Huxtoe Hundred, one ‘John Wiles’ is listed as recruited into the militia of 1777, with no occupation recorded (as is the case for all 17 men). This data appears to support the observation that people living in Duddington preferred their name to be spelt ‘Wyles’, whilst those living outside of Duddington appear to prefer ‘Wiles’. 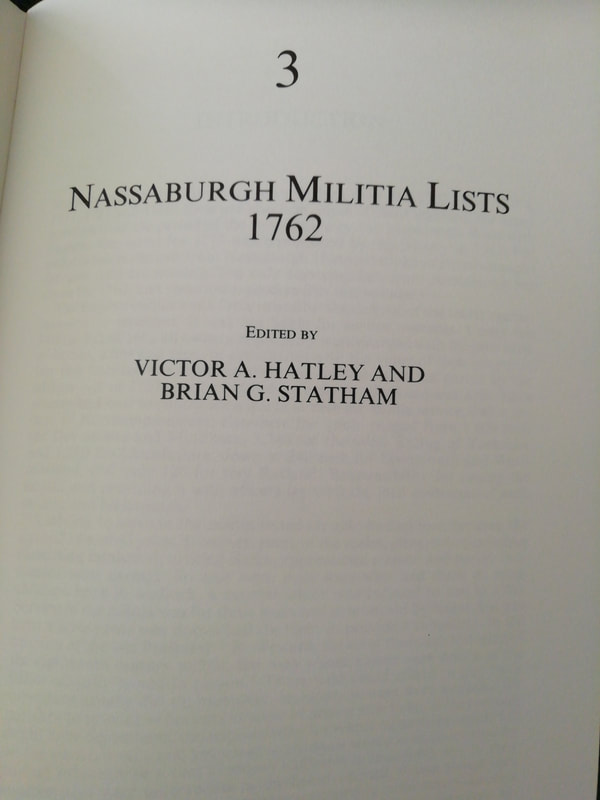 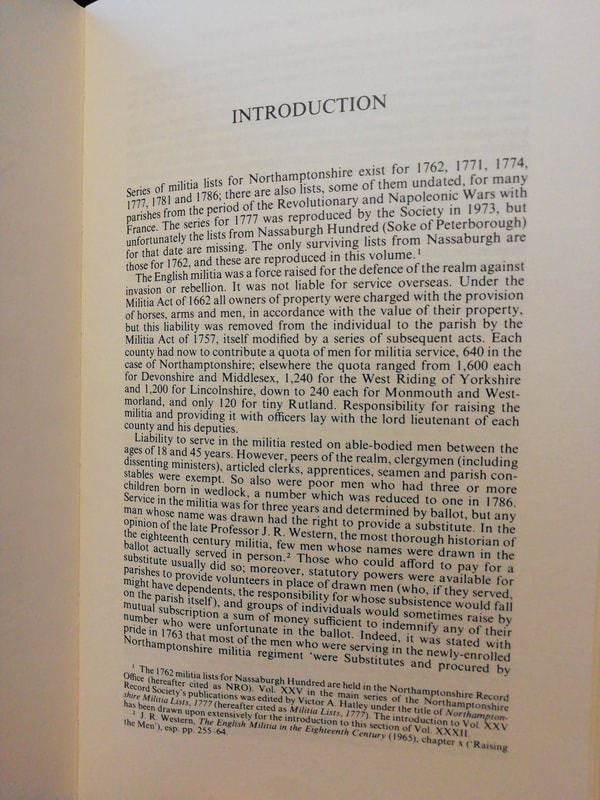 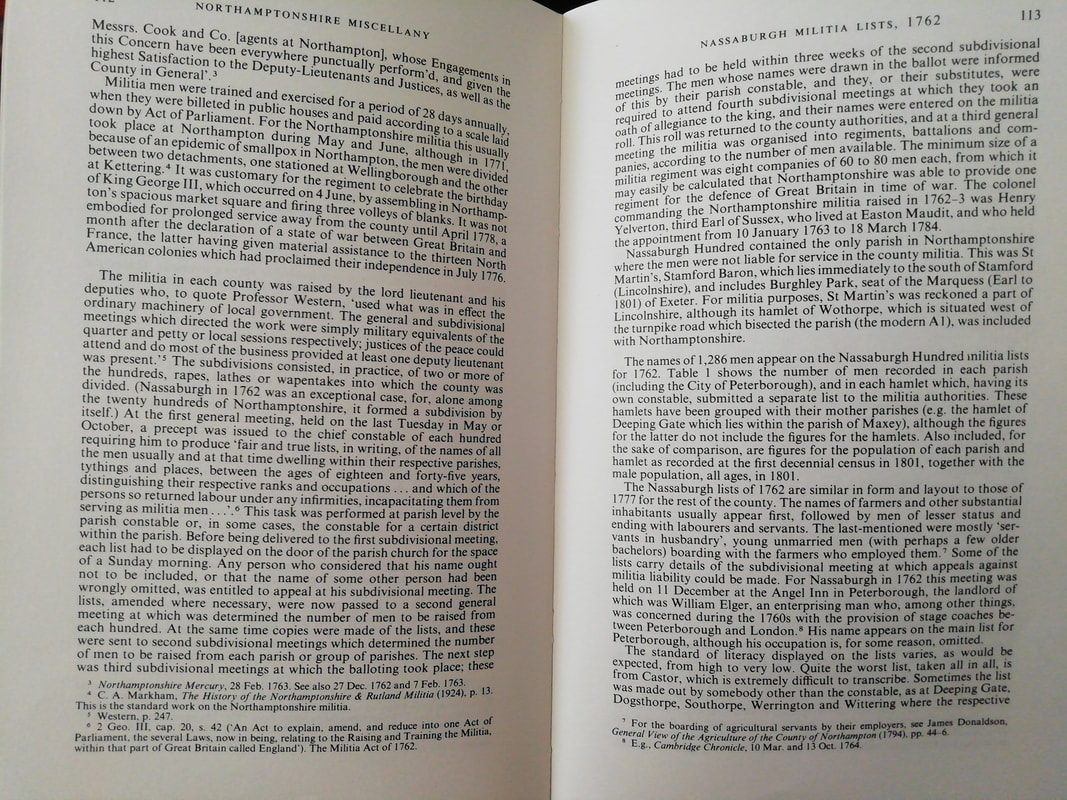 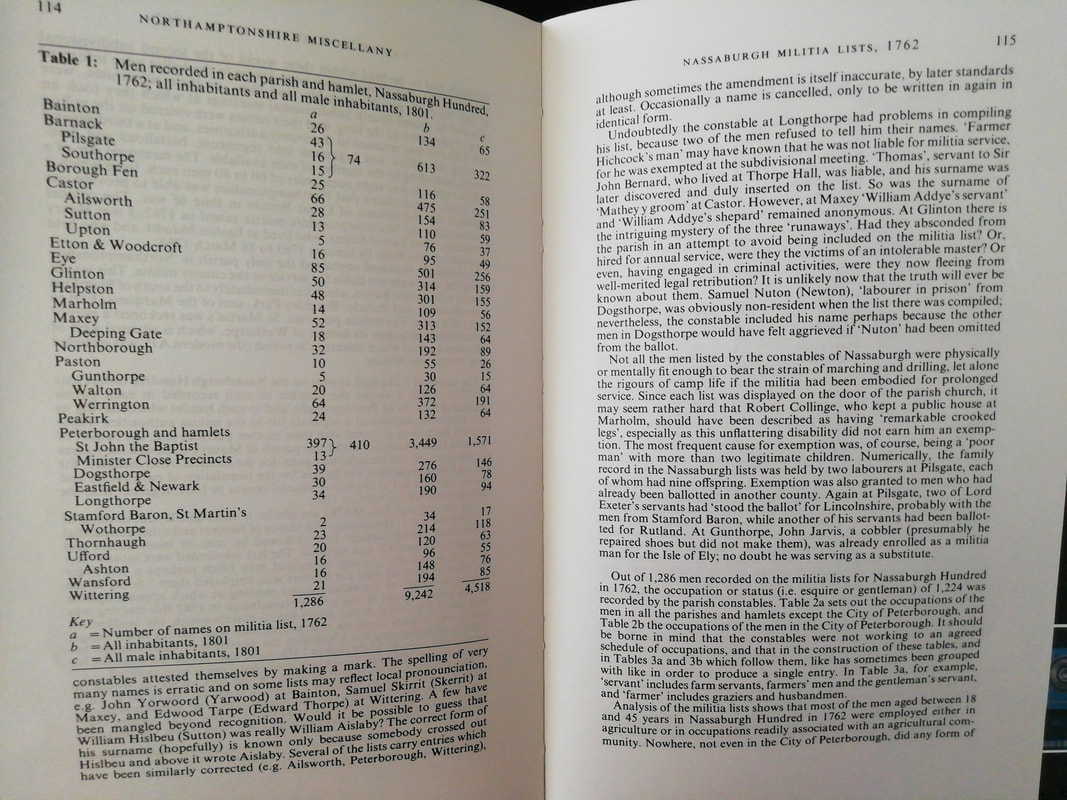 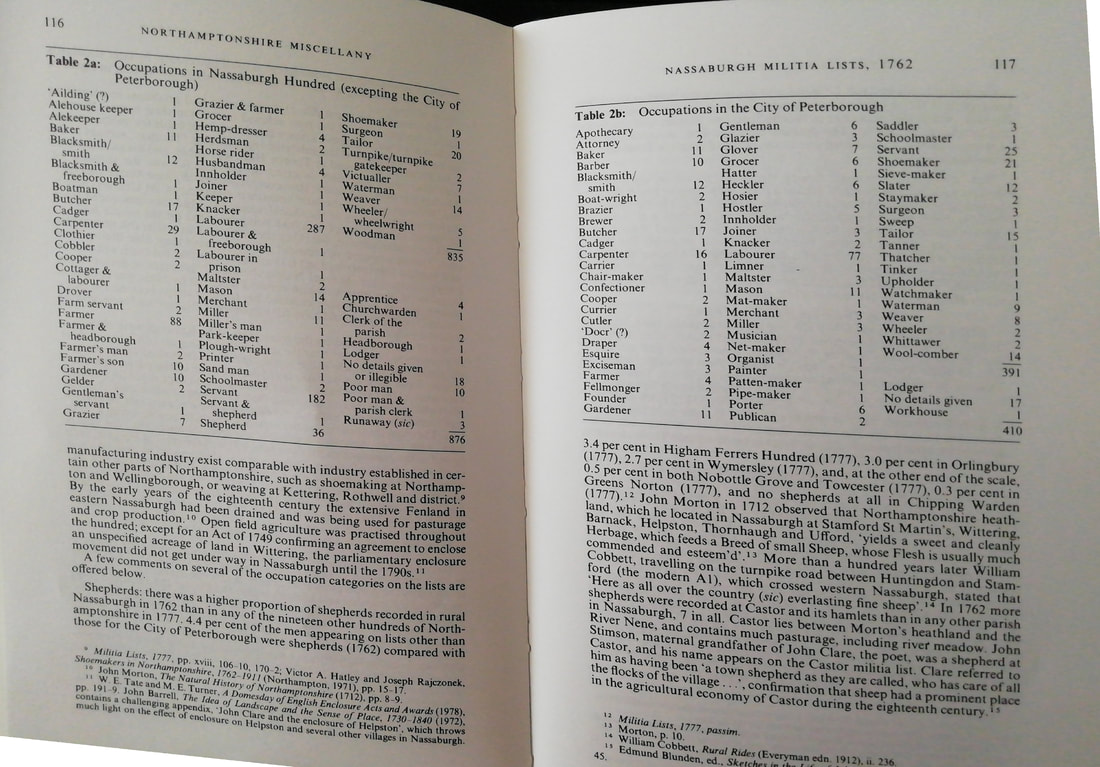 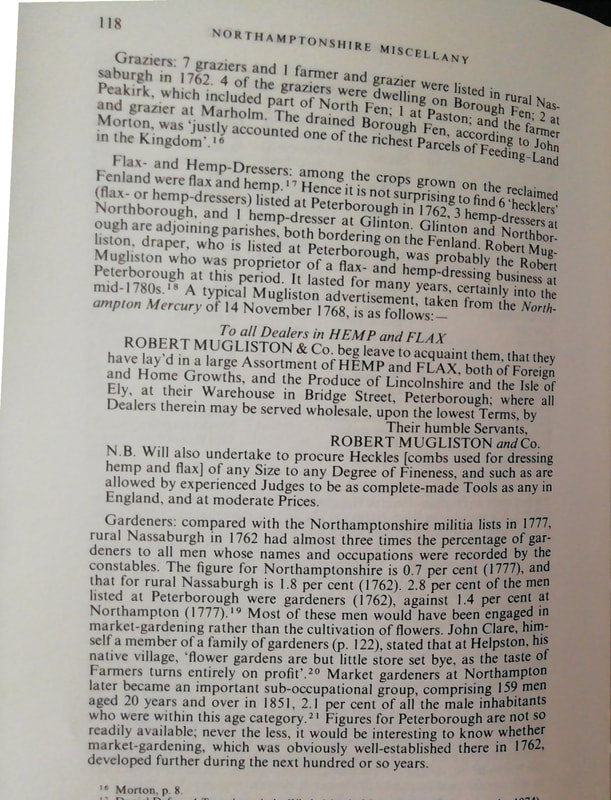 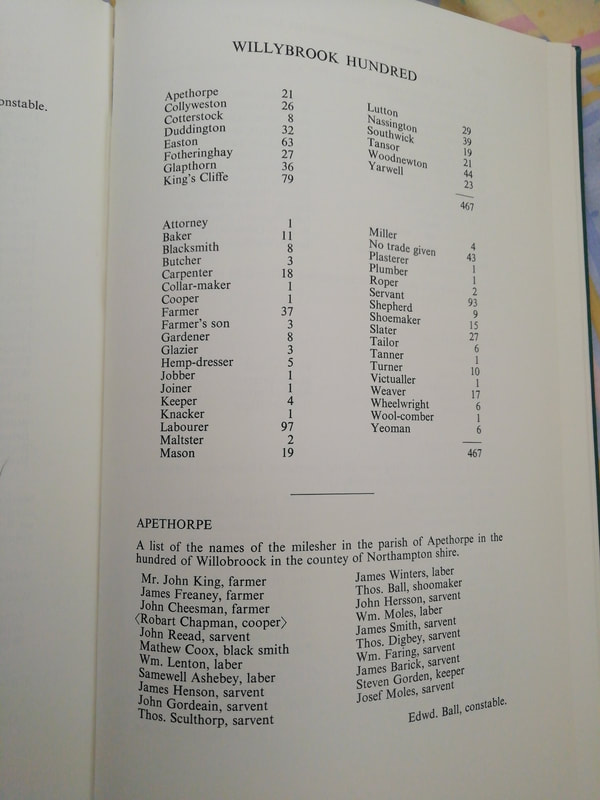 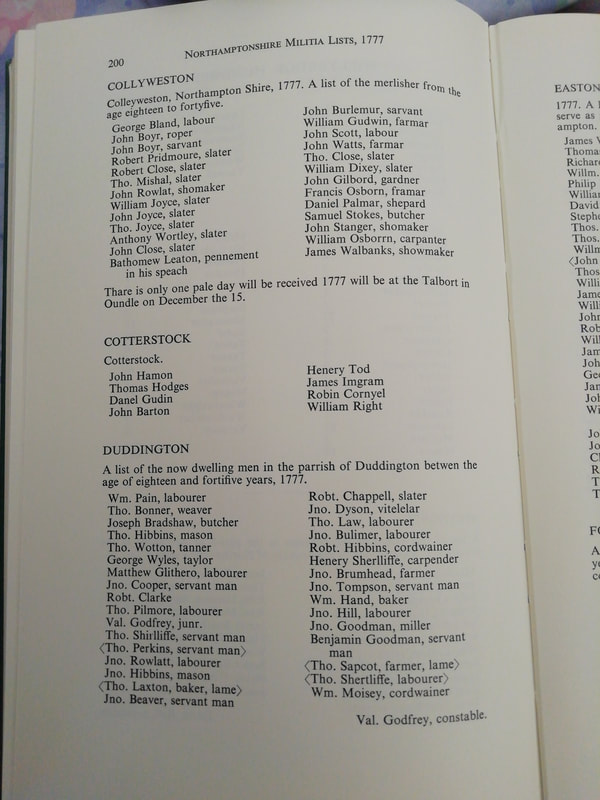 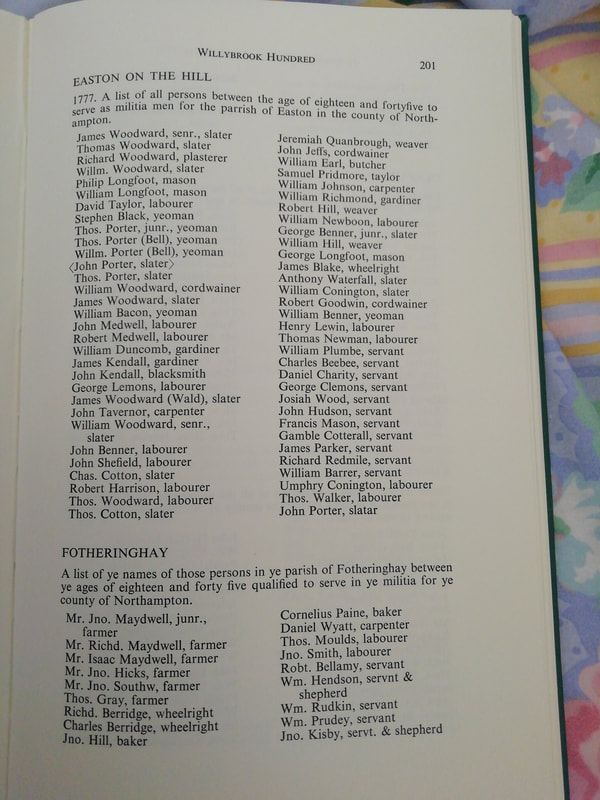 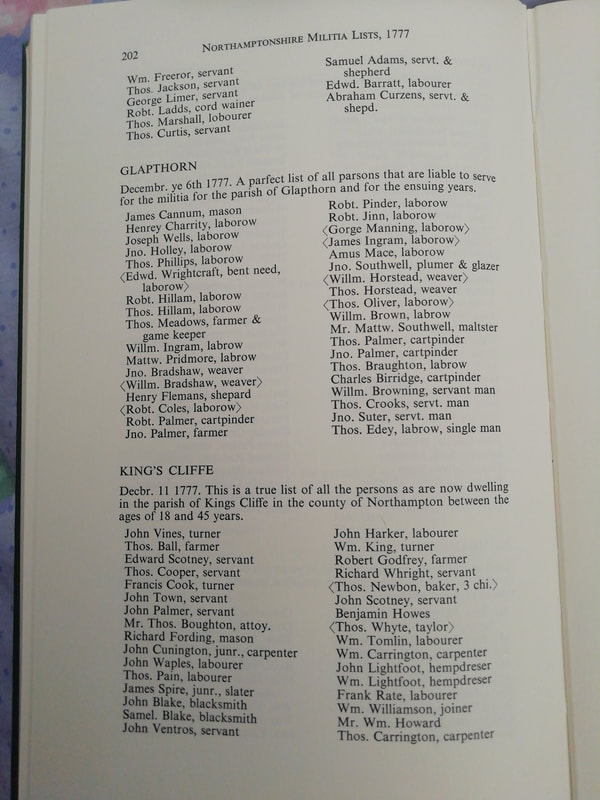 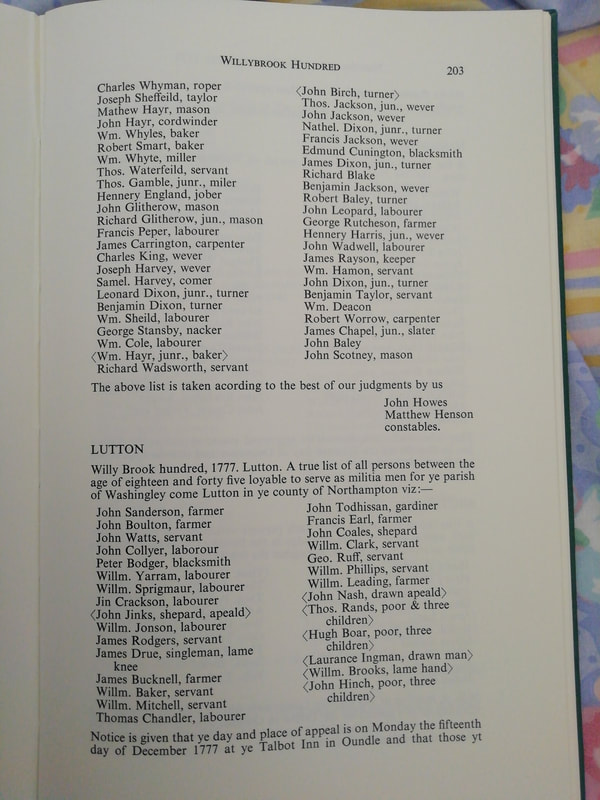 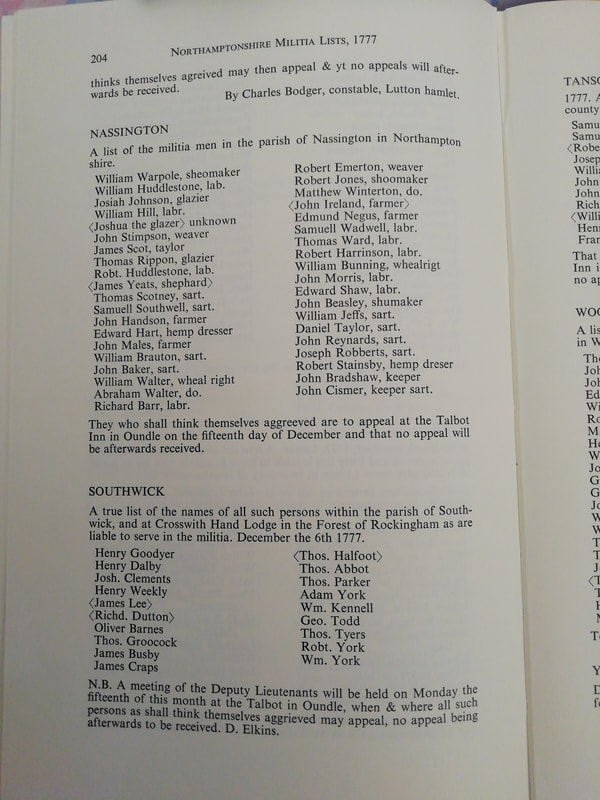 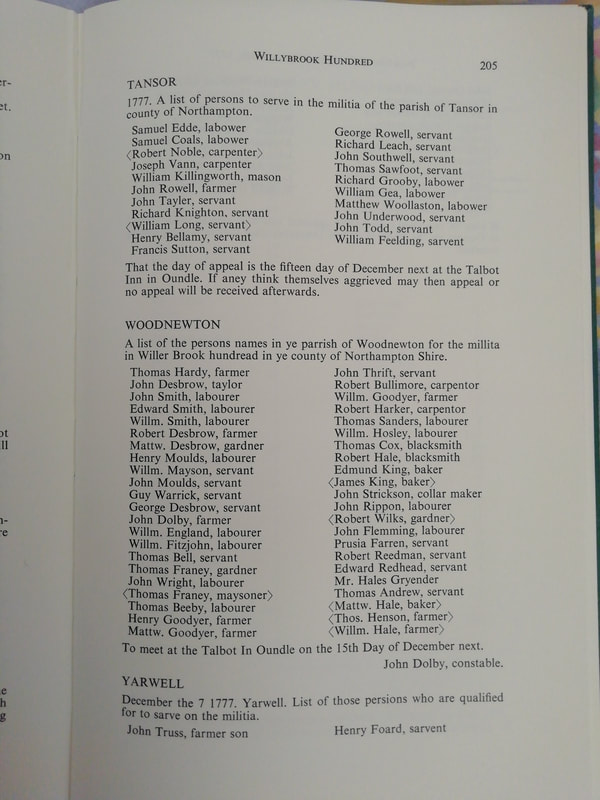 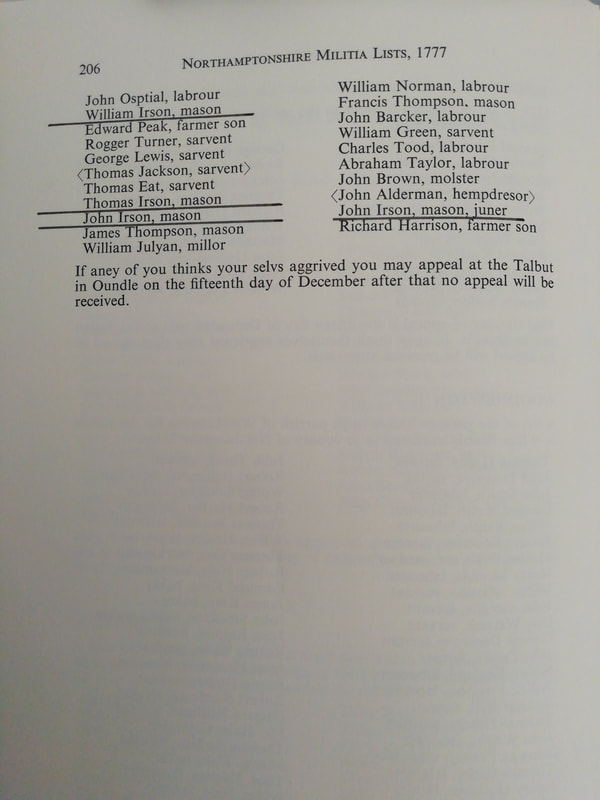