Origins of the Wyles Family of Kings Cliffe 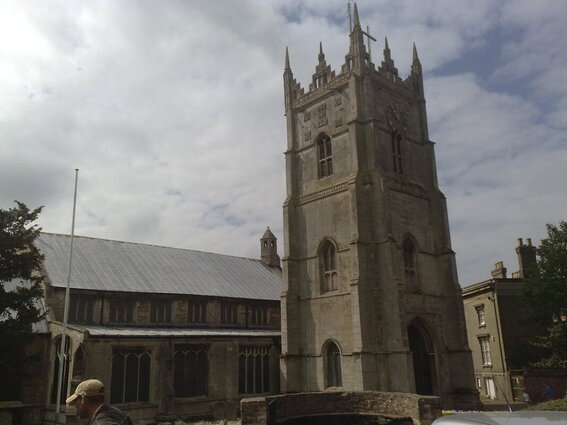 We have visited the graveyard of All Saints and St James Church probably around three times since 2008. We did this because occasionally the name of ‘Kings Cliffe’ came up a number of times when researching Wyles ancestry in the Duddington area. Kings Cliffe lies 6.5 miles south of Duddington, and has a population of around 1,202 people (as of 2011) - which is considerably larger than that of Duddington (281).

With most other places we have visited in search of Wyles graves, we find very little, but not so with Kings Cliffe. Kings Cliffe has possessed a thriving Wyles population since the middle 1700s, with representatives of that clan seemingly still living in the area. This is an important area for our research, as according to our research notes, the founding patriarch of the first (1st) Wyles family of Kings Cliffe was one ‘William Wyles’ (b. 1737) who was the son of John the Younger (d. 1770) and grandson of John the Elder (d. 1731/32) from Duddington. William Wyles married a woman named ‘Catherine’, and if memory serves me correctly, she was from Kings Cliffe. Unusually for the time, William Wyles (as the man) moved to the area his partner originated, rather than following the more common custom of the woman relocating to the man’s place of origination. This might have been considered shockingly modern at the time, whilst on the other hand the Wyles family – known for their innovation and pushing boundaries – may have taken this in their stride. We do not know Catherine’s maiden name but we do have a list of her children sired with William. From the earliest dates of their children, it would appear that this couple got married around 1760 (with William being 23), but they could have been married a year or two earlier, perhaps as early as William’s 20th birthday in 1757, but this is speculation. In order of birth, the eleven (11) children of William Wyles (1737-1799) and Catherine Wyles (1738-1796) are:

This is data gathered from the gravestones of Kings Cliffe, and the burial records that were on display in the Church itself (which was a diagram listing the location of all the graves and the names and details of the occupants). This has been supplemented by research into various forms of extant documentation which is ongoing. Although my research colleague who compiled this list was thorough and believed it to be correct, nevertheless, the question arises of there being forty-four (44) years between the birth of ‘Mary Wyles’ (in 1760) and the birth of ‘Henry Wyles’ (in 1804). Even if Catherine Wyles (the wife of William) was 18 in 1760, by the time of 1804 she would have been sixty-two (62) years old! It has been suggested to me that in the 1700s a girl could get married as young as thirteen (13) years old – which if applicable to ‘Catherine’ would have meant that in 1804 she would have been fifty-seven (57) - but this entire scenario seems unlikely (as we have never found any girl getting married that young in Duddington between 1500-1900, etc.). As Catherine’s years of fertility were probably between 1760-1780, this means that ten (10) of the eleven (11) children listed here, are the direct off-spring of William and Catherine, whilst ‘Henry Wyles’ of 1804 is probably a grandchild. There is a twenty-five (25) year gap between the birth of ‘Catherine Wyles’ (1779) and ‘Henry Wyles’ (1804) which suggests this interpretation is correct.
(Since writing the above, I have found below the following vital information. The gravestone of ‘Catherine Wyles’ records that she died in 1796 aged 58 years – which means she was born in 1738 and was 22 years old when she had her first child in 1760. She was one year younger than her husband – William Wyles b. 1737 – and probably did marry him around 1788. Whatever the case, she was definitely not the mother of ‘Henry Wyles’ b. 1804).

The next entry for Kings Cliffe recorded in our genealogical note-book is that the Kings Cliffe family of James Wyles and Ann Wyles (nee Scarborough). We believe this to be ‘James’ (b. 1770) the son of ‘William and Catherine’. He probably married Ann Scarborough around 1788 (as people in the Duddington area tended to get married on average around 20 years old, and certainly no earlier than 18 years old). The twelve (12) children of ‘James and Ann’ are:

Robert and William Wyles (b. 1792) appear to have been twins who died shortly after birth, or at least living long enough to have been named and presumably baptized. Of the twelve (12) children listed as sired by ‘James and Ann’, ten (10) managed to survive. This demonstrates at least two (2) very large Wyles family groupings in Kings Cliffe and there may well have been more. This suggests a strong and healthy Wyles clan with many descendants – with the family of ‘William Wyles’ (1737-1799) in Kings Cliffe described as highly successful ‘Bakers’. The Jackson family brought their baking skills to Duddington from Stamford around 1620 (or earlier), with the already present Wyles family acting as lawyers, estate agents, landlords, tailors, blacksmiths and baking (when not volunteering for military service in the local Militias). It could be that William Wyles relocated to Kings Cliffe in search of a new market for his baking skills (with Duddington dominated by the Jackson family) – and history records that he was successful.

The third (3rd) Kings Cliffe family in our notebook is that of ‘Thomas Wyles’ and ‘Martha Wyles’ (nee Rowlins). We suspect this is the family of ‘Thomas Wyles’ (b. 1772) - the son of ‘William and Catherine’. The three (3) children listed for ‘Thomas and Martha’ are:

The fourth (4th) Kings Cliffe Wyles family in our notebook is that of ‘Benjamin Wyles’ and ‘Mary Wyles’ (nee ‘Castledine’) who were married in 1799. We think this is ‘Benjamin Wyles’ (b. 1773) - the son of ‘William and Catherine’. We have one (1) child recorded, namely that of:

1) William Wyles (b. 1800)
​
In the Church of All Saints and St James we found the following information on the extant Wyles gravestones and the burial records on display in the Church: 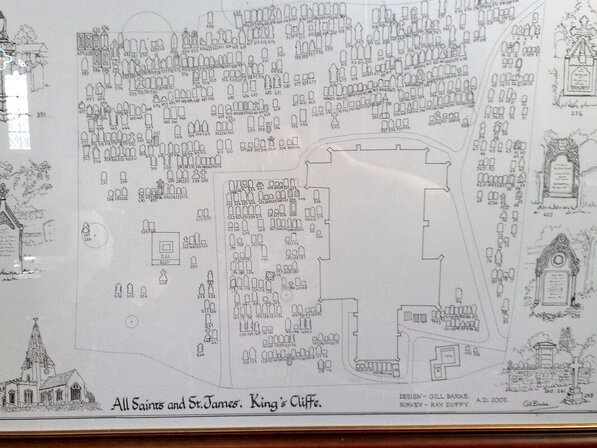 Sacred to the memory of Ann Rowle Wyles, daughter of John and Susannah Wyles – died March 11th, 1827 in the 20th year of her life.

Grave Number 418/1 In memory of Sarah Ann daughter of William and Elizabeth Wyles who died September 6th, 1829 aged 2 years.  418/2 Betsy daughter of the above who died... (unreadable). Burial records state the date as being 30th of September, 1831 aged.

‘Suffered much but murmured not.
We watched her day by day.
Our loving hearts forget her not,
although she passed away,’

Kings Cliffe Census - 1861 - Kezia Wyles (aged 62)  lives as a boarder with the Bollans family. Kezia Wyles is described as a 'Fund Holder'.

Grave Number 643 – Sacred in the memory of William Wyles, late baker of this parish upwards of 40 years, who departed life in 1799, aged 62 years.

Grave Number 644 – Sacred to the memory of Catherine, ye wife of William Wyles who departed this life on December 13th, 1796, aged 58 years.

​Grave Number 646 – Sacred in the memory of Henry Wyles who departed this life on April 9th, 1852 aged 18 years old. Also, of Charlotte Wyles – daughter of the above – who died in infancy. 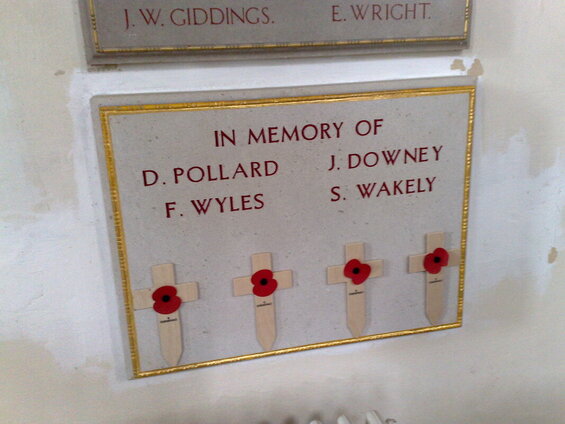 - Son of William Wyles (Grocer) A Military Roll of Honour in the Church reads:

Kings Cliff has a small Cemetery which contains a number of graves containing Wyles ancestors.