The Wyles Family in 1600s Duddington 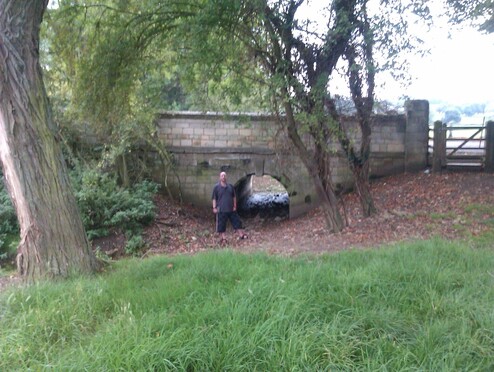 Medieval Bridge Over the River Welland (c. 1400s)
There are no visible burials dating to the 1500s (I.e. 16th century) in the graveyard of St Mary’s Church, Duddington. Of course, absence of evidence is not evidence of absence, and I am sure our ‘Wyles’ ancestors lie somewhere in now unmarked graves once demarcated by long-gone wooden crosses, buried at a time before the use of stone markers. The 1600s, however, are a different matter. It is perhaps ironic, that through the recorded deaths of the ‘Wyles’ ancestors, we can know something about their lives. In the graveyard of St Mary’s Church there are visible today ‘four’ (4) graves attributed to the Wyles family. The two earliest gravestones read: 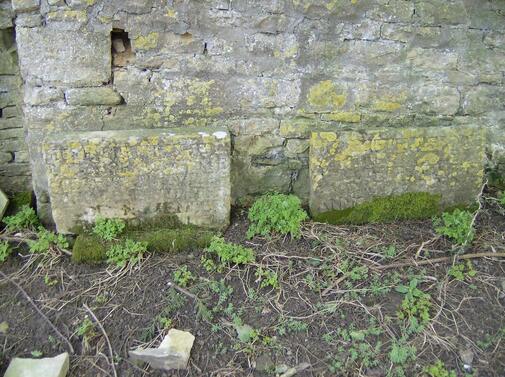 1) Here lieth the bodie of Robert Wiles who deceased the world 14 day of October Anno Domini 1619.

2) Here Lieth the bodie of AGNUS the wife of Robert Wiles who deceased the world 13 of November 1646.

In 2009, Sue-Ling Wyles spotted the two 1600s names engraved at the foot of the Vestry-wall, which read: 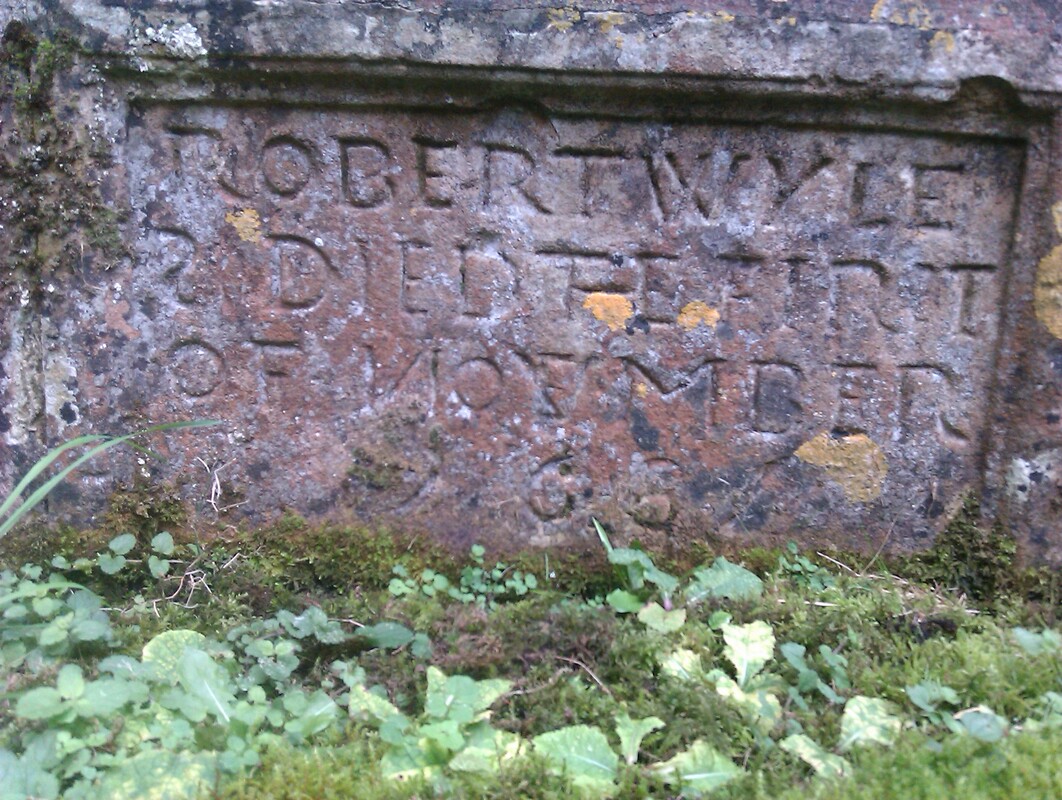 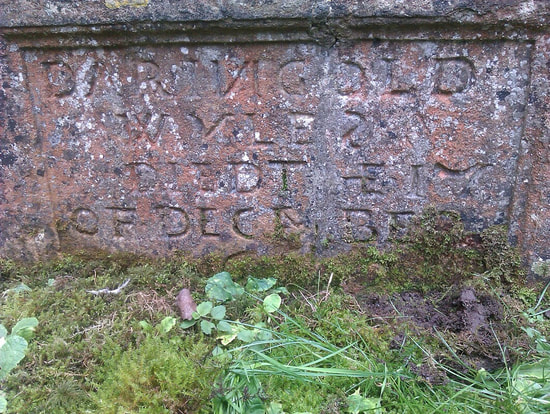 As the Parish Records for Duddington were destroyed in a flood, information for this area begins to be observable from around 1720 onwards (Parish Records began in 1558). Around ten years ago we collected around 76 Index Cards from the Northampton Record Office which record the buying, selling and renting of land in and around Duddington from 1530 – 1936. This is the ‘Copy of Court Rolls’ - or Court decisions pertaining to individuals living in the Duddington area. Land-ownership was a mark of affluence, social advancement, and political influence. Whereas serfs (and later impoverished labourers) worked on land they did not own, the Wyles family distinguished itself as land-owners and land-lords in Duddington from 1523 onwards (with most of this fortune dispersed through lack of sons and marriages of daughters involving substantial dowries, by the late 1700s).  Child mortality was high in the 1600s, with 12% of all children surviving birth dying within the first year of life. On average a reasonably healthy (and lucky man avoiding injury and illness) could live to around ‘40’ years of age – and it is this age that I have used to estimate life-spans and birth and death dates where lacking. Women may have lived shorter lives (between 35 – 40 years) due to complications arising from childbirth, but I have used ‘40 years’ as a rule of thumb for contextualization. Agnus Wyles presents a problem as we know her relation with Robert Wyles (he was her ‘husband’) because it is engraved on their gravestones. Due to this, I have allotted Agnus Wyles a life-span of 60 years (as despite short life-spans and high mortality rates for the time, people occasionally lived far beyond the average (despite the fact that Agnus had given birth). Robert Wyles, for instance, outlived Daringold by 14 years and probably died around 54 years old (with Agnus outliving her husband by 27 years, with either her Robert dying young, or she in her late 60s)! Combining the gravestone evidence with surviving Wills and Copy Court Rolls data for the late 1500s and throughout the 1600s, we have discerned the following genealogical information:
Robert Wyles [Yeoman] (b. 1579 – d, 1619) married Agnus Wyles (b. 1586 – d. 1646) (Gravestones – St Mary’s).

It is this ‘Robert Wyles’ recorded in this legal document from 1598:

‘'NO 1 lease to Nich. Jackson Copy of Court roll of Manor 'Dodington'. At the court baron of Thomas Cecill, Kt, Lord Burghley, Lord of the Manor, held 30 Sept 40 Elizabeth (1598). The Lord of his steward granted licence to Robert Wyles senior to demise to Nicholas Jackson a messuage, 3 acres of arable land (one in each field), a yard dole of meadow in le Little Meadow, 2 cow pastures and 10 sheep commons for 20 years. Fine paid the lord - 10s Signed by Roger Dale, steward there.’

We think it is this ‘Robert Wyles’ (the ‘son’) who is mentioned in this legal document from 1631:

Robert Wyles (Gentleman) Will – 1682 – appears to state that his fortune and property were left to two (2) daughters namely Sarah and Roberta – and one grandson (unnamed) who received an apprenticeship – but as there is no mention of ‘James’, this implies this is either a different Robert, or that a different Will was made to cover James.

James Wyles (Gentleman) Will – 1688 – leaves his fortune to four (4) daughters, namely Elizabeth, Rebecca, Sarah and Mary. No sons are mentioned, but it could be the case that another Will was made for any sons. This ‘James’ (d. 1688) is the brother of ‘Robert’ (d. 1682) - with this ‘Robert’ being the husband of Daringold – or an as of yet undocumented ‘Robert Wyles’.

If John the Elder (d. 1731/32) lived for 40 years, then it is probable that he was born around 1691. This would suggest that his parents would have been around 20 years old at the time of his birth, and born in 1671 (dying around 1711). The father of John the Elder was probably a man who was the off-spring of the Robert Wyles and Daringold generation (with their son James and his wife Joan being the best candidates for parenthood), or another of their sons that has not shown-up in any extant record, as well as a son from a different Wyles lineage not being excluded as a possibility. Robert Wyles (d. 1682) had a brother ‘James’ who had no sons (see ‘Will’ d. 1688), but also sired a son also named ‘James Wyles’ (who was married to ‘Joan Wyles’). The evidence strongly suggests that Robert’s son and wife – James and Joan – were the parents of ‘John the Elder’ (d. 1731/32) - until proven otherwise. Another lineage exists – namely that of Thomas and Edith – but this disappears from view around 1623, but the name ‘Thomas Wyles’ continues to occasionally emerge from the Copy Court Rolls throughout the 1600s. In the 1673 and 1674 Hearth Tax for Duddington, only Robert Wyles and James Wyles (probably ‘brothers’) are listed as paying their dues. Out of the 83 families inhabiting the village at the time, half were exempted from paying this tax on the grounds of poverty. I suspect Robert and James were high-flyers and very successful in the practice of law and the acquisition of land. Interestingly, the young ‘James Wyles’ (husband of ‘Joan’) and son of Robert Wyles (husband of Daringold) did not contribute toward the Hearth Tax (presumably not possessing enough wealth to qualify at the time – which was a common experience amongst ordinary people). For decades, the Wyles family and the rising Jackson family were very close indeed, with much inter-marriage and united business deals. However, I suspect that there were other lineages of the Wyles family that quietly got on with a much more modest lifestyle. One branch of the Wyles family preferred the Scottish (royal) name of ‘Robert’ for generations, before finally naming a child ‘James’ - presumably after the Crowning of James I (VI) of England in 1625.

There are two (2) 'visible' graves (containing 'four' individuals) of the Wyles family in the graveyard of St Mary's, Duddington dating to the 1600s (but it is logical to assume that many more exist):