The Wyles Family in 1800s Duddington 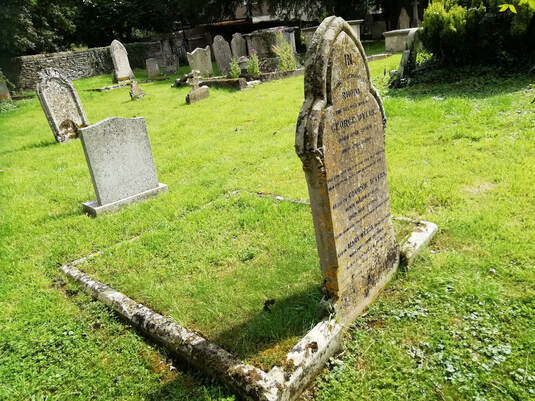 Grave of George & Rhoda Wyles
For 1800s we have the visible graves of fourteen (14) people named ‘Wyles’ in the graveyard of St Mary’s Church, Duddington. This is by far the highest number available for genealogical purposes. We also have access to ample Parish Records, Wills and the Copy of Court Rolls (acquired in the form of 76 Index Cards from the Northants Record Office covering the years 1530-1936). In 1813, one Robert Hencock (or ‘Hercock’) is recorded as being married to Francis Wood (nee ‘Wyles’) sold property to Joseph Turner of Ketton (described as a ‘Victualler’ - or ‘Landlord’ of a Public House licensed to sell food and drink). In 1775, Francis Wyles had been married to ‘John Wood’ for 5 weeks and 6 days. James Wyles and Catherine Wyles (of the 1700s) had a son named ‘George Wyles’ (1749-1828) - George is our direct relative. We discovered his death-date in two ways today. Firstly, my mother – Diane Wyles – found his Will online and posted it early this morning, whilst Gee (my partner) and myself read about George’s Will on one of the Index cards in our possession. George Wyles (Yeoman) described himself as a ‘tailor’ when he joined the Duddington Militia in 1777. When he died in 1828 (aged 79), he was a very wealthy man who left money and land to his nine (9) children – two (2) Daughters and seven (7) sons. The names of his children are recorded from the eldest to the youngest as being (daughters) Frances, Susanna (and sons) John, William, James, Thomas, Francis, Robert and David. George’s son ‘Thomas Wyles’ (1787-1853) is our direct ancestor (who married ‘Elizabeth’ 1804-1863) and is described as a ‘Blacksmith’ in official documents. Their son – ‘Thomas Wyles Jnr’ (1824-1887) married ‘Mary Ann’ (nee ‘Sweeby’) 1804-1863. Their son - ‘John Thomas Wyles’ (b. 1860) married Eleanor (nee ‘Britton’) - who eventually gave birth to my great grandfather – Archibold ‘Britton’ Wyles in 1887. In the 1891 Census, this family lived in the Crown Inn, Duddington, but in the 1901 Census, they had relocated to '144 North Street', in Uppingham.

On the 19th February 1833, John Wyles of Tixover (farmer) sells land to Hugh Jackson of Wisbech, and recalls the 1828 Will of George Wyles. Presumably, this was a ‘proof of ownership’ issue. On the 18th of October, 1838, a ‘George Wyles’ is laid to rest under a flagstone in St Mary’s Church situated in-front of the Vestry door. The inscription reads: ‘Sacred to the Memory of George, Son of John & Ann Wyles died the 18th of October 1838 in the 38 year of his age.’ This is the son of ‘John Wyles’ (mentioned above) and ‘Ann Wyles’ who are buried in the old Wyles Tomb situated under the modern Vestry floor (with their names recorded on the base of the exterior of the Vestry wall). This Wyles family of John, Ann and George lived over the medieval bridge in Tixover, and represent another branch of the Wyles family in the Duddington area. The final Index Card for the 1800s simply records ‘W. Wyles – Kings Cliff (1836-1839)'. The visible graves of the Wyles family in the 1800s (circa 2008 in St Mary’s graveyard) include:

In Loving Remembrance of Rhoda, beloved wife of George Wyles, born April 25th 1831, died April 3rd 1900.
Her children arise up and call her blessed. Her husband also, and he praiseth her.
Also of George Wyles, born March 8th 1831, died May 3rd 1908.
So he bringeth them unto their desired haven.
And of Mary Eliza their daughter who died June 26th 1863, aged 8 years and 8 months.
Suffer the little children to come unto me and forbid them not for such is the kingdom of heaven.

In Affectionate Remembrance of Chappell Wyles Who Departed this Life February 12th 1899 Aged 56 years.
Therefore be ye also ready for in such an hour as ye think not the son of man cometh.

In the Church of St Mary’s there used to be on display a very old and faded piece of paper which recorded the following names and functions:

Although there are thirteen (13) visible graves containing deceased Wyles people in the graveyard of St Mary's Church pertaining to the 1800s, the Burial Records for St Mary's (1809-1899) contain the names of thirty (30) Wyles people (with around five [5] others mentioned in passing but not properly included) who were buried during this time period:
Duddington Burial Records 1809-1899 (30 Entries) – St Mary’s Church