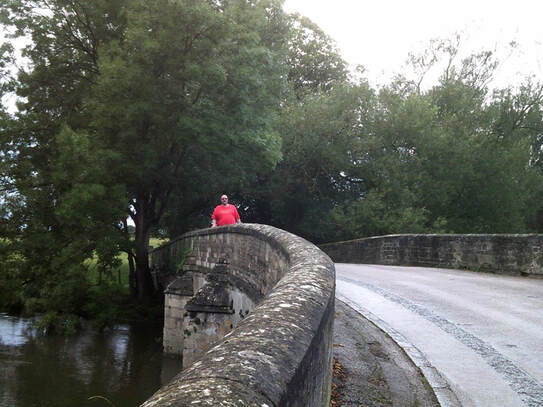 Medieval Bridge (c. 1380) - River Welland - Duddington
Although our great grandfather – Archibald Wyles (1887-1941) - left the Duddington area around 1905, his father (John Thomas Wyles [1860-1917] and mother [Eleanor b. 1861] carried on living in the Uppingham (Beaumont Chase) area (although Eleanor appears no longer to be alive by 1917). For our direct lineage of the Wyles family – Archibald is the last to have been born in Duddington – although his father John Thomas constitutes the last of our direct line to have actually lived in the area (having died on the 23.11.1917). A special mention must be made of Archibald's grandmother (the mother of his father John Thomas) – Mary Ann Wyles (nee Sweeby-Fitzjohn) who was buried in St Mary’s Church on the 16.6.1917 (aged 78). Having accessed the 1911 Census, we have worked-out the last surviving Wyles people in Duddington and they are mostly (directly) related to Thomas Wyles and Mary Ann Wyles – being the descendants of their children. This means they are all related (directly) to us, with the three male heads of household all being brothers and sons of Thomas and Mary Ann. Those not directly related to Thomas and Mary Ann represent different but related lineages of the Wyles family and I distinguish these branches not to establish any type of preference, but to assist all those people studying the Wyles family lineages and attempting to discern particular birth pathways. Everyone is of equal worth as far as I am concerned.

Other important considerations are as follows:

4) Mary Ann Wyles (1839-1917) was the wife of Thomas Wyles (1824-1887) and the mother of John Thomas, Jeremiah, Frederick, Ruth, Minnie and Susannah, as well as the grandmother of Archibald (and others including Percy Wyles who was 18 in 1911), and four other grandchildren with the surname ‘Pickard’. There is no doubt that Mary Ann Wyles was the esteemed and highly respected ‘Matriarch’ of the Duddington Wyles family and her contribution to our survival and well-being (as a daughter of the Sweeby-FitzJohn family) should not be over-looked or forgotten.

5) Henry Wyles was recorded as being 62 years old in 1911, and still working as a farm labourer (even at that age). He is treated as separate and distinct from the other families, and is recorded as a ‘lodger’ living in somebody else’s home. Henry Wyles died and was buried in the graveyard of St Mary’s Church on 6.12.1919. Although I cannot be sure given our current level of knowledge, Henry appears to represent a lineage of the Wyles family other than that descended from Thomas and Mary Ann.

6) Frances Wyles (41) is listed as the head of a household, and working as a ‘sick-nurse’. Her sister Edith Sarah Wyles (19) is ‘single’ and a self-employed dress-maker (working from home). As neither Frances nor Edith are mentioned as off-spring of Thomas and Mary Ann – they might well represent another Wyles lineage.

7) Ethel Wyles (25), born in Duddington, is mentioned as a visitor of the Tarrant household, and her occupation is a seamstress.

8) Not mentioned in the 1911 Census for Duddington is ‘Agnes Sarah Wyles’ (1878-1949 – buried in Duddington’s small Cemetery (situated at the south end over the main road and opposite The Royal Oak Inn).