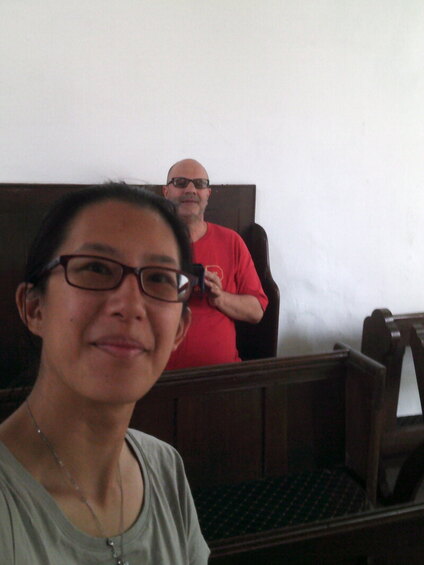 Gee & Adrian Wyles – St Mary’s Church – Duddington (11.8.2019)
I have read that the first Parish Records began to be collected in the UK in 1558. These early attempts at data gathering were naive and often inconsistent and incomplete, despite various types of tax-collection records being in existence for centuries by this time. When I searched for burials in the graveyard of St Mary’s Church in Duddington, records only went back to 1735. It is a similar story for baptisms and marriages (with records stemming from around 1720). I am informed that the Duddington Parish Records before 1720 were destroyed in a flood. Certainly, the River Welland normally runs within about 30 meters (around 100 feet) of the Church, and flooding could well occur with unusual weather conditions, (I am assuming the Parish Records were kept in the Church). Just to the south of the church there is a ‘Meeting Hall’ but the current structure dates from 1931, with what was once the ‘Workhouse’ lying just up the road from this. There is a broad slip-way not far from the south facing gate of the church where Duddington was supplied by boat for centuries (although the area stands quiet today). This was the hub of Duddington in its hay day. And likely the storage area of all official paper records. The data contained in Parish Records was also copied for the ‘Bishop’s Peculiar’, which was basically a legal device for the Church Authorities (and the ‘Crown’ through its ‘Royal Peculiar’) to ‘spy’ on what people were doing at the ground level around various churches and local areas. By and large, ordinary people did not understand (or care about) the power inherent in their personal data, and yet the Church and Secular Authorities kept a keen eye on events and trends. Even today, it is not easy to access the ‘Bishop’s Peculiar’, but the records often still exist barring catastrophes and disasters, etc. Needless to say, the extant Parish Records of Duddington go back no further than around 1720, and tell us ‘nothing’ about the Wyles family in the early 1500s.

The Lay Subsidy Roll of 1301 reports a ‘Roger Wyles’ paying tax whilst living in Oundle (which is 12.6 miles south of Duddington). Although only a single instance of a ‘Wyles’ in the Duddington area (of the wonderfully named ‘Rockingham Forest’), it is evidence that Wyles people were in the vicinity in the early 14th century. The first time the Wyles family emerges in the written historical records for Duddington is in the Lay Subsidy Rolls of 1523, where a ‘William Wyles’ and a ‘John Wyles’ (the latter written as ‘Johes’ Wyles) are listed as paying tax. In 1524, these two men are recorded as paying tax to Henry VIII. The Henry VIII reference was easily discovered on the net, whilst Prof. Peter McClure (of Nottingham University) recently provided the 1523 Lay Subsidy Roll evidence. As no one named ‘Wyles’ is recorded as paying tax in Duddington prior to 1523, we can consider two interpretive positions:

1) No one named ‘Wyles’ lived in Duddington prior to 1523, and 1523 (or there about), remains the date for the Wyles family first moving into Duddington.

2) The Wyles family lived in Duddington prior to 1523, but like most people in the UK, were not wealthy enough to pay tax either to the Church or the Crown. In the 1673 Hearth Tax for Duddington it is recorded that 83 families lived there, with half exempted from tax-payments due to poverty.  By then, at least two branches of the Wyles family were rich enough in land possession and capital to pay tax, (Robert Wyles [d. 1682], and James Wyles [d.1688]). However, this should not exclude the idea that other branches of the Wyles family did not pay tax. In medieval times tax was viewed as an upper-class ‘honour’ which directly funded the Church (earning merit in the after-life), and the Crown (earning merit in this life). Most people were not considered worthy enough (either spiritually or materially) to have such a ‘direct’ contact with the Church or Crown.

Two wealthy men (probably ‘brothers’) either suddenly developed wealth and land possession in Duddington (after their family living there in relative obscurity for an unknown length of time), or they moved into the area in 1523 from parts unknown. Another possibility is that an ordinary Wyles family lived in Duddington for decades prior to 1523, whilst two rich relatives moved into the area in 1523. All we can say for certain is that the Wyles family first appear to be recorded in Duddington in 1523 using current levels of knowledge. Around ten years ago, we collected 76 Index Cards from the Northampton Record Office (NRO) dating from 1530-1936 (recording all local Court decisions for land buying, selling and renting - I.e. the ‘Court Rolls’ for Duddington). It is from the data contained on some of these cards that we have been able to build-up an image of life in Duddington between 1530-1566. In 1530, ‘Robert Wyles’ makes his appearance on the scene, and sets about buying a large amount of land (and buildings) in the Duddington area. He obviously possesses both wealth and knowledge of the law.  John, William and Robert were brothers, but none of them mention their father or mother in their legal dealings. This is what we have been able to reconstruct about the Wyles family of Duddington between 1523-1566. Unless otherwise stated, the dates stem from the Court Rolls and refer to land deals at specific times in the lives of these people. In general, we are dealing in ‘first mentions’, but on occasion we were able to infer certain details such as likely dates of death. Margery, for instance, is recorded as a ‘minor’ when land was transferred to her in 1547 (I.e. under 12 years of age), as it looks like her father – William – had died:

We have assumed that John, William and Robert (1523-1530) are brothers, but we have no data concerning their parents or origination, etc. Moving on to their progeny, an Index Card dated 1566 states that ‘John Wyles and Robert Wyles are brothers.’ We assume that this refers to the 2nd generation off-spring of John, William, and Robert, but we must speculate about where this information fits in. We know John (the Elder) had a son ‘John’ (the Younger) - and could also have had another son ‘Robert’. We also know that Robert (Senior) had a son ‘Robert’ (Junior) and could have also have had another son ‘John’ - we do not know for sure. There is also a possibility that another – unknown – Wyles family had two sons named ‘John’ and ‘Robert’. We have associated Richard Wyles with Robert Wyles due to a land deal recorded in the Court Rolls. We do not know if William or Nichola had any other children, or if their lineage survived the late 1500s (due to having no sons). We do not know when John died, but William seems to have passed in 1547, and Robert in 1562. In the strict feudal times of 1523, British society was formally segregated into castes of social order, with the nobility, clergy and serfs defining the main categories. Emanating from the ‘serfs’ (or indentured slaves), various other categories emerged that remained outside of nobility and the Church. John, William and Robert Wyles all describe themselves as ‘Husbandman’, who were ‘free tenants’ (or ‘free men’ who could decide their own lives), who owned small farms of sometimes substantial size, which rented landed to tenants and were farmed by various men (and women) organized within feudal subgroups (such as cottars and gresemen, etc. A ‘Husbandman’ was an agricultural landlord who had worked his way out of the slavery of serfdom. Although Robert Wyles obviously knew the law, in 1530 he had to follow the convention of the day and refer to himself by his father’s birth status. With the ushering in of modernity after 1539 by King Henry the VIII, social mobility became more flexible and ordinary people started to define themselves by their wealth and education. Around the late 1500s, however, the Wyles family started to refer to themselves as ‘Yeoman’ (an assistant to a knight or lord), and we see various men named ‘Robert Wyles’ in Duddington from around 1566 participating in legal deals involving Lord Burghley, the Earl of Bedford and the Earl of Exeter, etc. Almost always the legal advisor on these land deals is signed ‘Robert Wyles’ all the up the late 1600s. This behaviour is ‘assisting’ the aristocracy and therefore qualifies the individual concerned to be referred to as a ‘Yeoman’. In the early 1600s (and often thereafter), Wyles people started to refer to themselves as ‘Gentlemen’, or individuals who have performed outstanding or continuous clerical, legal or military service to the Crown and are allegeable for ‘Knighthood’. It seems by the time of the death of Robert Wyles in 1682, this branch of Wyles gentlemen were being educated in law at Stamford, Oxford and Cambridge.

There are no 'visible' burials for the Wyles family (for the 1500s) in the graveyard of St Mary's Church, Duddington. However, as the Wyles family lived and died in the area, it is logical to assume that some people named 'Wyles' are buried there.