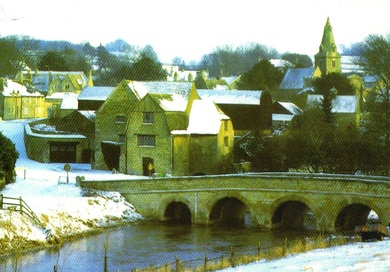 Update: 10.8.2019 - Prof. Peter McClure of Nottingham University (who is compiling the second edition of the Oxford Dictionary of Family Names in Britain and Ireland) has informed me via email (dated 9.8.2019) that he has found the details of one 'Roger Wyles' living in Oundle, who paid his taxes and is recorded in the lay subsidy roll for that area dated '1301'.  Oundle is situated 12.6 miles south of Duddington, and Prof. McClure is of the opinion that this person might well be the 'first' Wyles of Duddington!

''Pardon to Richard Wyles of Marnham for the death of Walter Mayser of Haneworth, as it appears by the record of Simon de Grymesby and John de Crosholm, the younger, justices of gaol delivery, Lincoln, that the same was caused in self-defence.'

Update: 24.7.2019 - Little Hale is situated 40 miles northest of Duddington. In a document entitled 'Lay Subsidy 1334 for Little Hale', one 'Robert Wyles' is recorded as paying tax at 1s-4d - he is one of 36 people to be making such payments which vary from as much as 6s-8d - to as little as 1s-0d, etc.  Subsidies - described as a 'tax on moveables' - which were paid to to the Crown with the rate at one time being set as 4s for land and 2s-8d for goods, and applied to different locations depending upon the value of property or goods contained therein. The higher the value the higher the tax, etc. Only the well-off paid taxes in those days.

Update: 28.10.14 - the following names and dates have been discovered in medieval legal documents that cover the Lincolnshire area - of which Duddington was once apart.  These names all relate directly to the Wyles family and probably indicate the presence of the Wyles in Duddington itself going as far back as 1344:

It is an interesting fact that the earliest known ‘Wyles’ that can be located spelt with a ‘y’ (instead of an ‘I’), is that of  'John Wyles' from 'Welton' in Lincolnshire - where it was a family name in Welton - dated to 1202. (Another interesting example is that of Thomas Wyles of Perth, (Scotland), who was a signatory to the 1291 Ragman Rolls). Prof. Peter McClure of Nottingham University has stated that there is a 'Roger Wyles' listed in the Lay Subsidy Rolls as living in Oundle (12.6 miles south of Duddington) in the year 1301. The earliest known known record ffor the presence of 'Wyles' people in Duddington is that of the Lay Subsidy Rolls of 1523-1524, and tax payments to Henry VIII for 1524-1525 - both relating to William Wyles and 'Johes' or 'John' Wyles.  From 1530 onwards, the name of 'Robert Wyles' (Husbandman') is observable in local Court Records dealing with the buying and selling of land in Duddington. It is probable that these three men were directly related and had spouses and off-spring that comprised a broader Wyles community in Duddington.  In a 1598 tax-return for Duddington – collected in the name of Queen Elizabeth I - the name of one ‘Robert Wyles. is recorded.Income-tax in the old days was only paid by the very wealthy, and between 1523 and 1598, (some 75 years), the relative wealth of the Wyles family appears to have endured, and it is likely that this wealth was generated through land-ownership, although no record has yet been found to explain how the Wyles family first came into possession of this land.  As tax was payable upon this land, this fact would suggest the ownership of a sizable estate. In the 1600’s, however, there are a number of father and son combinations (in the various records relating to Duddington, and other nearby places), who share the first name ‘Robert’, and are known to have been ‘Solicitors’, arranging and witnessing many Wills, and other contracts of a legal nature.  When these men left their own Wills, it is evident that they were well educated and wealthy, and at the head of a large ‘Wyles’ family.

In 1688, the Will of James Wyles (written in 1682), states that he had no sons, and that as a consequence, he intended to leave all the extensive land that he owned in Duddington, Collywestern, and Dolbroke (or 'Polebroke'), solely to his eldest daughter named Elizabeth.  Obviously Elizabeth would have married-out of the Wyles family, (taking all the land with her), and this might explain the dramatic changes in fortune of the Duddington Wyles clan in general, after the 1700’s.  Prior to this date, it would appear that certain members of the Wyles family of Duddington were members of the landed gentry - and secured their income through landlordism, although records show that some others were recorded as both 'Husbandman' and 'Yeoman' - all feudal social ranks.  This income would have given them the economic ability to purchase a distinctly middle class education (and lifestyle), and pursue a career in the legal profession.

(Further research into the 1688 Will of James Wyles and the 1682 Will of Robert Wyles reveals that both men left their considerable fortunes to their daughters - James had four daughters, whilst Robert possessed two - and that their branches of the Wyles family had no male heirs and ended with them. This means that whoever were the ancestors of 'John the Elder' [d. 1731/32] it could not have been either James or Robert Wyles).

In the 1700’s, the most prominent ‘Wyles’ occupation appears to that of brewing beer – by John the Elder, and his sons – from a distillery in the village.  In the late 1700’s to around the mid 1800’s, the brewery business appears to have gone, and the major occupation is that of ‘Blacksmith’ (through Thomas and Elizabeth).  After this, the ‘Wyles’ male descendants appear to have become ‘labourers’ and ‘domestic servants’ – and this remained the situation until around 1901 – when my great grandfather Archibald Wyles (and our branch of the Wyles family) left Duddington.  The changing in fortunes of the Wyles family follows the trend of the urbanisation of agricultural workers following the Industrial Revolution, as many relocated to major cities (around the UK) looking for employment in the numerous factories.  This process led to the effective breakup of longstanding, extended family groups (and communities) settled in a specific geographical area.  People felt compelled to leave sleepy villages, and sedate towns because there was no longer any chance of regular employment.