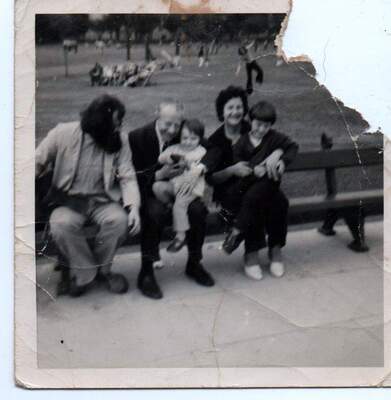 Peter Wyles (left), with his parents and children - Torquay
​Welcome to the ‘Wyles Family of Duddington’ research site and information exchange! This website is dedicated to the Wyles family of Duddington, of which our family represents one branch of the surviving Wyles clan that can trace its history directly to the inhabitants of this quiet and delightful place. Our Chief Archivist (and internet researcher) is Diane Wyles (nee ‘Gibson) [b. 1948] who is the partner of Peter Desmond Wyles (b. 1948) - who traces his ‘Wyles’ surname lineage directly back to ‘Robert Wyles’ who arrived in Duddington circa 1530. My name is Adrian Peter Wyles (b. 1967) and I am the son of Peter and Diane. Together with my partner Gee Wyles (nee ‘Yau’) [b. 1984] - and two children Mei-An and Kai-Lin – we are responsible for all field trips, the gathering of information from the real world, the logical collation and organization of this data, together the Administration of this website. I am an academic (my writing name for my published works is is 'Adrian Chan-Wyles') who specializes in the reading of ancient and modern Chinese script, and the translation of Chinese historical, philosophical, political and cultural texts into reliable (modern) English. My partner Gee, is a London Midwife working in a very busy NHS hospital – and is an excellent academic in her own right who often edits the manuscripts of my published work, whilst offering constructive criticism of my ideas and output. Operating as a family, we have started this project from scratch (around 2007) with my mother (Diane Wyles) finding various certificates and census forms all mentioning a place called ‘Duddington’ in Northamptonshire – a place my father (Peter Wyles) had never heard of, yet was the birthplace of his grandfather Archibald Britton Wyles (1887-1941) and all of his relatives going back hundreds of years!

On a Saturday morning in March 2008, Gee, myself, Sue-Ling [b. 1998] (my eldest daughter) and Liz decided to drive to Leicester, and take the old route which went through Duddington. My intention was to take a few photographs of a quaint and even eccentric old English village before moving on to Leicester to see what we could find about the Wyles family. After a two and a half drive, we entered Duddington at its south end, and had reached the medieval bridge at its north end in about 10 minutes. We stopped the car next the Water Mill and I photographed the bridge. I expected to get in the car and continue our journey to Leicester, but Liz suggested that we drive back to St Mary’s Church and have a quick look in the graveyard. That ‘quick look’ has lasted nearly 12 years so far, and we still haven’t managed to get to Leicester! Having a rare surname and never meeting anyone else who possesses it, I was astonished to see a graveyard containing stones scattered throughout with the names of my ancestors engraved upon them! We have returned to Duddington around twice a year ever since, always looking for more evidence, checking the evidence we already have, and to record as much about Duddington as is possible per trip.

We have collected internet data including births, baptisms, marriages, deaths and burials as well as Will, Court Decisions (I.e. the buying and selling of land), and have researched numerous published books and journals for information about the Wyles family and Duddington. Within Duddington itself, we have gained almost all our name data from inside and outside St Mary’s Church. Not only this, but one cottage in the village carries the date-plaque which reads ‘John Wyles 1745’. We have also visited Kings Cliff, Collyweston, Gretton, Ketton and Tixover, as well as Stamford Museum. Although this knowledge builds a bigger picture of life in Duddington, we have never found such a strong cluster of Wyles people as that held in St Mary’s. Prof. Peter McClure (of Nottingham University) has stated to me that there is recorded a ‘Roger Wyles’ as living in Oundle (situated 12.6 miles south of Duddington) in 1301, and that so far this is the earliest known Wyles in the area. The earliest Wyles people we have found so far for Duddington is William and John Wyles, both of whom paid tax in 1523 (under Henry VIII). As matters stand, it looks as if these two men entered Duddington from somewhere else, soon followed by Robert Wyles in 1530. I suspect these men were brothers, and are the foundation of at least three branches of the Wyles family that have inhabited Duddington until the early 20th century.

Duddington is a quiet, picturesque village, situated 6 miles southwest of the town of Stamford, in the English county of Northamptonshire.  The River Welland runs through Duddington - which rests on its east-bank - and marks the county boundary of Rutland.   In the 2011 Census, the geographical area covering Duddington and Fineshade is recorded as numbering just 281 persons, whom represent 119 distinct households.  St Mary’s Church - which lies at the heart of Duddington - has a graveyard that contains many stones marking the passing of many people surnamed 'Wyles'.   There are at least eight visible graves (including one crypt) in the graveyard, with one member of the Wyles family buried under the floor - inside the church - and another four names of members of the Wyles family engraved on the outside of the church-wall.  Inside the church, there is a plaque commemorating the Wyles men of Duddington who fought in World War I, and old lists of those named 'Wyles' who held various official and voluntary posts in the church itself.  These graves, plaques, and lists, convey the names of at least 26 individuals named 'Wyles'.  The earliest grave in St Mary’s is that of 'Robert Wiles' dated 1619 - whilst the latest grave (located just up the road within the Duddington Cemetery) is that of Agnes Sarah Wyles who died in 1949.  We discovered yesterday (18.8.2019), that the grandmother of Archibald Wyles – Mary Ann Wyles (d. 1917) - was the last known ‘Wyles’ of our clan to be buried in St Mary’s. These burials are augmented by at least 6 graves for people named 'Wyles' at the nearby All Saints & St James Church of Kings Cliffe, and further 2 graves at Kings Cliffe Cemetery - which together represent at least another 14 members of the Wyles clan. A recent (2019) email communication has informed this website of a cluster of people named 'Wiles' and Wyles' living in the Witham on the Hill, and Dowsby areas lying to the north of Duddington (see the associated article in the left drop-down).  Lastly, it has been suggested that Duddington lies on what used to be the road from Scotland to London - and that this might explain the presence of a small but poignant group of deceased people in St Mary’s graveyard who bear distinct and unmistakable Scottish surnames.