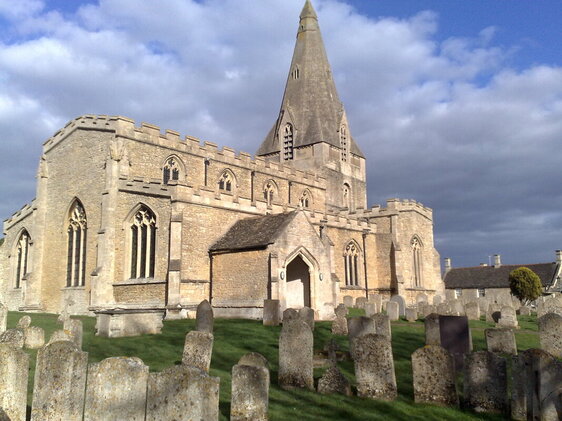 Wyles Graves - All Saint Church – Kings Cliff
Between 2008 – 2010 – we received a tremendous amount of help from a friend who then worked for the Audit Commission, and was expert in record-compiling, record-organization and analytics. We gathered a tremendous amount of Wyles related data, with Diane Wyles researching the Duddington Wyles family through births, baptisms, marriages, deaths and Wills, etc., online, and myself and my family travelling to Duddington and carrying out field-work. It took two years to compile the basic family tree going back (then) to 1524, with a direct line to ‘John the Elder’ (d. 1731/32), and a gap between him and James Wyles and his partner - ‘Joan’. Originally, all we had for the 1600s was ‘Robert Wiles’ (d. 1619) and his wife ‘Agnus’ (d. 1646) and two Wills – one relating to James Wyles (1688) and Robert Wyles (1682). In the early 1500s we had tax-records for William Wyles, and ‘John Wyles’ (who we first thought was called ‘Joseph Wyles’ due to his name being recorded as ‘Johes’), and in the latter 1500s there was a tax-record for ‘Robert Wyles’.  We had no idea how it all fitted together. We then found the Vestry Wall inscriptions and we gained two more 1600 references for ‘Wyles’. As the layers of interpretation were building-up, a colleague of mine paid a visit to the Northampton Record Office (NRO) where he acquired 76 Index Cards concerning the Wyles family of Duddington between 1530-1936 (there was a card for ‘1520’, but this turned-out to be a mistake). We have only had time to fully assess and correlate this new data over the last year or so, and when compiled with our existing knowledge, our Duddington family tree was completed from today all the way back to 1530 – the year Robert Wyles entered Duddington.  John the Elder had been a sticking-point for years as there was no documentary evidence to discern his parents (even in his 1731 Will). However, when all the family tree was constructed and fitted together (we tended to focus on each century – separately - and then fitted each century together), it became obvious that James and Joan Wyles were the parents of John the Elder. This is the line:

For reasons not known, this early lineage of the Wyles family preferred the Scottish name ‘Robert’, but then chose to name their son after a Scottish King - ‘James I (VI)’. James married Joan Jackson and appears to have named his first son with the male version of ‘Joan’, I.e. ‘John’. John Wyles then named his first son ‘James’ after his father. Looking at all the data we have, our current knowledge suggests that all the Wyles people that lived in Duddington and its surrounding area, are the descendants of ‘John the Elder’ - with two branches. The Duddington branch descends through ‘James’ the eldest son of ‘John the Elder’, whilst the Kings Cliff branch of the Wyles family descends through ‘John the Younger’, the second eldest son of ‘John the Elder’. John the Younger’s son - ‘William’ (b.1737) - married a woman from Kings Cliff and started a very strong and affluent Wyles clan which exists to this day.  Kings Cliff Wyles people are buried in the graveyard of All Saints Church, as well as the small Kings Cliff Cemetery (our notebook records one such entry for the latter as ‘1) In Loving Memory of a Dear Wife & Mother Violet Eliza Wyles died 25th March 1966 Aged 60yrs. 2) Also a Dear Husband & Father Harry Wyles died 11th May 1980 Aged 76yrs. 3) Also Their Son Frederick Ernest Wyles – Drowned – Singapore 3rd September 1961.’ Both the Duddington and Kings Cliff families descend from John the Elder through his two sons – James and John the Young (through William). Life carried on as normal for the Duddington Wyles family, whilst ‘William Wyles’ the grandson of John the Elder, founded an entirely new clan-branch. Both branches have their origins in ‘Robert Wyles’ who first entered Duddington in 1530, creating the short genealogy of:

The Duddington and Kings Cliff branches of the Wyles family are essentially two branches of the same single lineage. In the early 1500s, at least three men named ‘Wyles’ entered the village – John, William and Robert – starting three branches. It looks to me that only two of these branches survived into the 1600s (John and Robert), with only one of these branches surviving into the 1700s (namely that of ‘Robert’) and splitting into the Duddington and Kings Cliff branches, of which I am a descendent. All Wyles people from Duddington and Kings Cliff should be of the Robert line. There is no evidence of Wyles people leaving Duddington prior to the 20th century. The local aristocracy refused to allow the railway line or big businesses to penetrate the area, and so the people living there were not subject to the forces of change as were most other places. The Wyles family was not even affected by the Industrial Revolution during the 18th and 19th centuries, and certainly did not leave their village in search of work in far off factories (as many ordinary people had to do, to survive). The population of Duddington was isolated and self-sufficient. Due to this ‘static’ lifestyle, we are able to research our genealogy with a relative ease due to the ‘conservative’ nature of Duddington both past and present. Even today, although there is virtually no commerce or social mobility in Duddington, things remain ‘unchanged’ (with most of the homes owned by rich city-dwellers who use them for occasional weekend retreats). There are no visible ‘mass migrations’ overseas from the people of Duddington. I see no evidence of men or women travelling even to Ireland or any part of the British Empire, until Duddington men volunteered for service in the British Army during WWI and WWII. My great grandfather – Archibald Wyles – left Duddington around 1906 – and eventually ended-up in Birmingham before joining the Royal Navy Air Service (1917-1919). However, we recently discovered that Archibald's grandmother - 'Mary Ann Wyles' (1839-1917) - (the wife of Thomas Wyles 1824-1887 his grandfather) is the last known Wyles to be buried in St Mary's (at least of our lineage). From around 1900 – 1960 is when life for places like Duddington changed forever. A thriving community life slowly collapsed as local people moved away, and rich people looking for property took their places. As most buildings in Duddington are ‘listed’ today, this means that they are old and worthy of preservation. The current owners must pay for the maintenance and upkeep of these buildings and never ‘change’ their structure. Of course, this does not apply to gravestones, and we have noticed a marked deterioration in their state in just ten years of regularly visiting St Mary’s graveyard. An interesting question is whether there exists today, any Wyles lineages directly linked to Duddington that do not trace their heritage back to John the Elder?