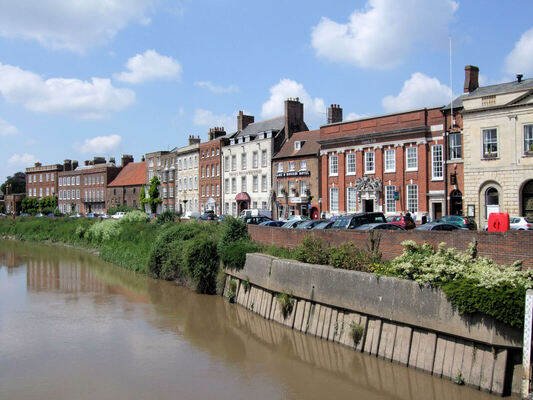 In this bundle of data compiled between 1601-1830, we find a preponderance of surnames spelt ‘Wiles’ as opposed to ‘Wyles’. As the Parish Records for Duddington spanning the 1600s were destroyed in a flood, direct evidence for the village is missing – but all is not lost – as many details can be gleamed from other texts and sources of information gathering collected over the same time period. Generally speaking, Duddington appears to be a staunch ‘Wyles’ area, and in other research I have demonstrated that although ‘Wiles’ has been by far the more popular spelling in areas surrounding Duddington, this does not seem to be the case within Duddington itself.  In this text ‘Wiles’ = 17 and ‘Wyles’ = 2 – with both the latter examples held by women.

Note.--The Marriage Registers of this parish up to 1812 are contained in five volumes. The first four are long and narrow parchment books, measuring from 13 1/2 to 15 3/4 by 6 inches, bound in parchment or boards and in good preservation. They comprise entries of Baptisms, Marriages, and Burials for 1558 - 1668, 1668 - 1712, 1712 - 1745, and 1746 - 1764 respectively; Baptisms and Burials being carried on in the fourth volume to a later date. The fifth volume, a printed book bound in rough calf and measuring 15 1/2 by 10 inches, contains the Marriages for 1754 - 1812, thus overlapping volume 4. by ten years. Mr. Young has examined the Bishop's Transcripts at Ely, and any important variations or additions are here noted within brackets [] and in italic type. These Marriage extracts have been made by Mr. Gaskoin, and are now printed by leave of the Rev. J. P. Whitney, vicar of the parish.