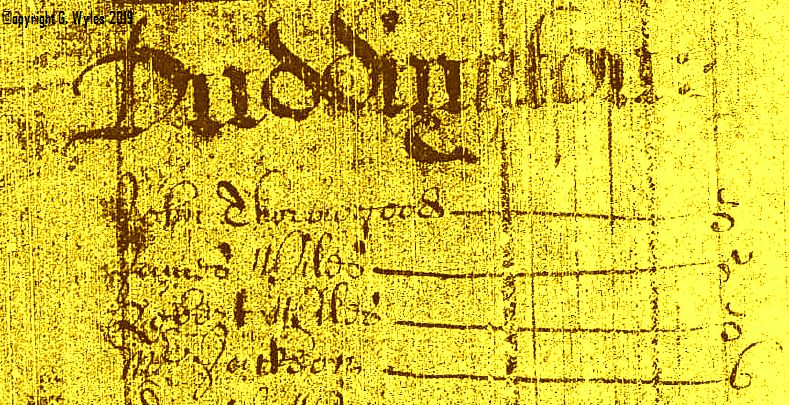 Artist's impression of original 1674 Hearth Tax document
In the days of absolute monarchy and the Church ordaining all Kings and Queens in England – paying tax was seen as an honour and a privilege, as it confirmed the subordinate link between wealthy land-owners, the nobility, high-ranked clerics and the royal household, and guaranteed all those deemed ‘worthy’ of paying tax as having a say in the upkeep of Church and State, and even in deciding policies (such as mounting and participating in official expeditions, opening trade links, establishing diplomatic links, sponsoring marriages and even raising large armies for warfare). The onus was one of gaining the most revenue from the least number of wealthy (and worthy) individuals living in England, with many other families – although relatively well-off – being excused on grounds of ‘poverty’ (which might well be a code-word in certain incidences, for being considered ‘unworthy’, or at least surplus to fiscal requirements). Not paying tax equated in those days of feudalism to not having any influence in the affairs of State and Church. The fact that John Wyles and Willims Wyles are recorded as paying tax in Duddington to the Church (in the Lay Subsidy Roll of 1523), and to Henry VIII (in 1524) – speaks volumes for their social status (soon to be followed by Robert Wyles in 1530).

Times changed rapidly under Henry VIII’s Reformation (1529-1537), and his Dissolution of the Monasteries (1536-1541) which set England firmly on the path of modernisation. The English Civil Wars (fought between 1642-1651) ended with the victory of Parliament over the Crown and a permanent shift of political power from the Crown to Parliament. Absolute monarchy was abolished, as was any notion of a State Religion. However, with the Restoration of Charles II (as a Constitutional Monarch with little real political power), came the re-establishment of the Church of England – although now subordinate to the Authority of Parliament. The people of Duddington appear to have serenely lived through all these seismic changes and emerged by and large unscathed. England had abolished the Crown in 1649 (with the execution of Charles I), and no longer had the funds to finance a royal household by the time Charles II returned in 1660, and so the British Parliament decided that it needed to raise a sudden (and substantial) amount of revenue to keep Charles II and his entourage in the opulent lifestyle they had enjoyed whilst exiled in France.

This is the reason the English Parliament established the ‘Hearth Tax’ (1662-1689) - which was never popular in post-Civil War England (as an association with a powerless and once ‘abolished’ royal family did not carry the same prestige that paying tax to Henry VIII once did). A one shilling charge per hearth (‘fire-place’) or ‘stove’ was levied on all houses or any such living area in England – to be paid twice a year – once on September 29th (Michaelmas), and once on March 25th (Lady’s Day). Until the UK adopted the Gregorian Calendar in 1751 (with New Year beginning on January 1st 1752) - New Year's Day used to be March 25th in England. The Hearth Tax used to be collected every six months – and was very unpopular due to officials being allowed into private dwellings to count the hearths – even without permission from the owners of the houses concerned. When Parliament ousted James II in 1688 (the ‘Glorious Revolution’) and subsequently enthroned William III and Mary II (originally from the Netherlands) as the ‘new’ (Protestant) monarchs of England, the (by then) hated Hearth Tax was abolished in 1689, on the grounds that it was a great ‘oppression’ upon the ordinary English people (rich and poor alike!).

The Royal Commission that investigated the historical buildings of Duddington in 1984, published in its report certain details of the 1673 Hearth Tax which states that the Earl of Exeter (who lived in Burghley House situated near Duddington), had to pay for 70 hearths. The population of Duddington at this time consisted of 83 families – half of whom were ‘exempted’ from paying the Hearth Tax due to poverty. We have subsequently accessed the original Hearth Tax document for Duddington collected a year later – on September 29th, 1674 – from the Northamptonshire Records Office (NRO). There are around ‘one hundred’ (100) entries of the names of individual people who qualify to pay the Hearth Tax in Duddington. The names are not in alphabetical order, but seem to listed according to those who own the most fire-places, down to those who own the least. This is not a perfect cataloguing system as the first three names listed each owe ‘5 Shillings’ (for 5 hearths), whilst the fourth name down the list (which looks like ‘M Jackson’) owes ‘6 Shillings’ (for 6 hearths). There are two men named ‘Wyles’ - namely ‘James Wiles’ (5 shillings) and ‘Robert Wiles’ (5 Shillings) - recorded second and third on the list (above what we think is either ‘M Jackson’ or ‘Mrs Jackson’). We believe these people to be the brothers ‘Robert Wyles’ (d. 1682) and ‘James Wyles’ (d. 1688). Although the document is very hard to read, we think the first 9 (nine) entries read like this:

1) Robert and James Wyles were administratively responsible for collecting and paying the Hearth Tax for ALL Wyles families living in Duddington.

2) If there is one hearth per house – it is logical to assume that there were ten houses owned by the various branches of the Wyles family in Duddington at this time. This suggests at least ten Wyles family branches in a village that a year earlier contained 83 different families over-all.

According to the Royal Commission (1984) the founding patriarch of the Jackson family in Duddington was Nicolas Jackson (a wealthy baker originally from Stamford). He was ‘renting’ property in Duddington in the late 1500s, and started buying property in Duddington from 1603 onwards. He was living in Duddington by 1620. If the dates given for him are correct (on a Jackson genealogical page), he was born in 1570 and died in 1662 – meaning he lived for an extraordinary 92 years when the average was around 40 years. Whereas the Royal Commission (1984) states that ‘By 1668 his son William was calling himself gentleman’, the Jackson genealogical page suggests that William Jackson died a year earlier in 1667.  Whatever the case, by the time of the 1674 Hearth Tax, we cannot establish who exactly ‘M Jackson’ (or ‘Mrs Jackson’) was.

Update: (31.8.2019) The Duddington Hearth Tax has the brothers ‘Robert Wiles’ (d. 1682) and ‘James Wiles’ (d. 1688) listed as owing ‘5 Shillings’ each, indicating that they owned houses or dwellings that contained ‘10’ fire-places over-all (5 each). In the Will of James Wyles (1688) it states that he had ‘4’ (four) daughters, whilst in the 1682 Will of Robert Wyles, it states he had ‘2’ (two) daughters. Robert Wyles (married to Daringold) also had a son ‘James’ (who was married to Joanne Jackson). We cannot clearly read all of Robert’s Will, but it seems that his son - ‘James’ - is not mentioned in this version (which might be due to the fact that everything automatically went to ‘James’ any way, and Robert wanted to ensure a fair inheritance for his daughters). The fire-places may have been distributed like this:

James and Sarah – 1
Elizabeth (daughter) - 1
Rebecca - (“) - 1
Sarah (“) - 1
Mary (“) - 1
Robert and Daringold – 1
James (Son) and Joanne (Wife) - 1
Sarah (Daughter) - 1
Roberta (“) - 1
​
This type of thinking would account for ‘9’ (nine) of the collective ‘10’ (ten) fire-places assuming the distribution to be one per household. We believe that James and Joanne were married in 1668 – the year Daringold would pass – six years prior to the 1674 Hearth Tax considered here. We also think that James and Joanne are also the parents of the ‘John the Elder’ (d. 1731/32), who could have been born any time after 1668. This suggests that he could have been a young child in 1674, and lived into his sixties (a lifetime spanning two centuries) when the average age was around ‘40’. Of course, all this is speculation working from the evidence we think we possess. We have to continuously re-assess everything we think and go over all our knowledge to refine interpretations or make new conclusions. For instance, today we shall double-check whether ‘Roberta’ is the correct (female) name in the Will of Robert Wyles, and does not refer to yet another son named ‘Robert’! As matters stand, we are reasonably sure ‘Roberta’ is correct, but cannot explain adequately the absence of any mention of ‘James’ (married to ‘Joanne’). Until proven otherwise, it looks to us that only ‘1’ (one) male Wyles line survived into the early 1700s (that of Robert and Daringold) and that we are all the descendants of ‘John the Elder’ (d. 1731/32). This 1674 Hearth Tax Record appears to support this idea and certainly does not give any reason to contradict this conclusion. The missing ‘10th’ (tenth) fire-place may well belong to a Wyles sibling we have yet to find. As James and Robert were brothers, it seems that only one line of Wyles (in two factions) survived into the late 1600s, but we must be careful here, as I suspect that other Wyles people may well have existed who do not show-up in taxation or land-owning records. Like ‘Thomas and Edith Wyles’ of the early 1600s, sometimes they appear out of nowhere – never to be heard of again! I have always wondered who ‘Henry Wyles’ (1848-1919) was, who - whilst being buried in the graveyard of St Mary’s - lived as a lodger in the area (like an ‘outsider’), and was listed as a ‘Labourer’ still working in the fields at the age of 62 in the 1911 Census!

Update: (1.9.2019). If the above model is correct, then we can account for ‘9’ (nine) of the ‘10’ fire-places registered for consideration during the September 29th Hearth Tax of 1674, in Duddington. As we have all five accounted for with regards to James and Sarah (plus their four daughters), it would appear that it is in the family of Robert and Daringold that a sibling might well be missing. We know they had two daughters mentioned in Robert’s 1682 Will, and that they also had a son – James Wyles – who married Joanne Jackson around 1668 (Copy Court Rolls). I suspect that there might well be another ‘son’ sired by Robert and Daringold, and that he and James were probably included in another Will that has not yet re-appeared or come to light. As our knowledge stands at the moment, it is logical to assume James and Joanne are the parents of ‘John the Elder’ (d, 1731-32) - but this is because we have no other candidates. It could be that the father of ‘John the Elder’ is this ‘missing’ son of Robert and Daringold (I am assuming a ‘son’ as all their daughters appear to be mentioned in the 1682 Will) - but we will not know this for sure until we find a document with ‘John the Elder’ stating who his father was – which seems unlikely as we have had a good many talented individuals looking for this data with no success over the years. Of course, a son could have lived and died young, or died with no male heirs, etc. This is an intriguing detective story which I love being a part of!