The Wyles Family in 1900s Duddington 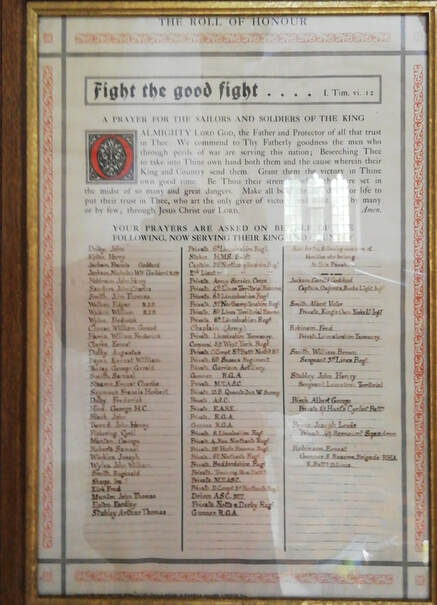 St Mary’s Church- Prayers of Well-Being for the Fightingmen of Duddington – 1914-1918
The 1900s (20th century) saw the changing of life forever not only in Duddington, but all similar villages in the UK. Villages that had remained isolated and insular for centuries found that time had run-out for this way of life from the 1900 onwards. With the inventions of modernity and its enhanced communication, travel and opportunities for better paid work elsewhere, villages such as Duddington emptied of most of their populations – leaving ancient buildings unattended and uncared for. Many such villages fell into ruin whilst others were redeveloped beyond all recognition – but this did not happen to Duddington. Obviously, some people stayed behind, whilst the old buildings were recognized by the British Government as being historically ‘important’ (a 1984 Royal Commission recorded 33 such buildings in Duddington), with ample grants being available for preservation, and clauses inserted into leases and rental agreements ordering that the buildings must be kept in their best condition whilst remaining ‘unchanged’. Of the 281 people officially listed as currently living in Duddington, many own local properties whilst living and working elsewhere for much of the year (perhaps living in Duddington at the weekends or at holiday times). Regardless of their absence, (there are no shops and only a single public house at the south-end near a main road), they must pay their local Council Tax and contribute in other ways to the upkeep and preservation of the area.  The process of the old and local population being replaced by affluent people from other areas began in the 20th century, probably in the 1960s and thereafter. There is a small, clean and tidy Council Estate situated at the north-east area of Duddington containing about 20 houses (accessed through the A47 on the Stamford Road, leading into Duddington High Street). This has an outside play area for children, (indeed, it is the only place in Duddington where I have seen families), not far from the very infrequent Bus Service (with the only Bus Stop being on the High Street). The main houses were built just after WWII in the mid to late 1940s, whilst the nearby bungalows were built in the 1980s.

This is what I have already written about my great grandfather – Archibald Britton Wyles (1887-1941) – the last of my lineage to have been born (in the Crown Inn) and lived in Duddington:

‘On his marriage certificate dated 1.10.1910, Archibald Britton Wyles (born 1887) is recorded as living at '33 Beakes Road' in the ‘Smethwick’ area of Birmingham, also known as West Bromwich. His occupation is listed as that of ‘Groom’, and if memory serves me correct, he worked in Uppingham (which is 8.6 miles west of Duddington) as a young man pursuing this occupation, before migrating ever further westward toward Birmingham. Although living in Birmingham when he joined the Royal Navy Air Service (RNAS) in 1917, his War Record lists him as coming from Duddington and now working as a ‘Draper’.  This is the story of how our family ‘Wyles’ lineage left Duddington in the early 1900s. If, for sake of argument, it is said that Archibald left Duddington on his 18th birthday (c. 1905), then it would be another 103 years before his great grandson (i.e. myself – Adrian Peter Wyles) would yet again set foot on the soil of Duddington – the land of our ‘Wyles’ forefathers.’

We have subsequently discovered that 'Mary Ann Wyles' (1839-1917) - who was the wife of 'Thomas Wyles' (1824-1887) - as the grandmother of our great grandfather - 'Archibald Britton Wyles' - was the last of our Wyles lineage to inhabit Duddington. See below for more information.*

The burial records for St Mary’s Church state that there are eight (8) burials in the graveyard for the 1900s relating to the Wyles family – although none are visible today. They are:

A list of ‘Organists and Blowers’ no longer on display in St Mary’s Church records the name of ‘P. Wyles’ as a ‘Blower’ dated as ‘1905’. This list used to rest on the sill of the south-facing window.

On a bronze plaque commemorating the brave men of the Parish who fought in the British Armed Forces during WWI (1914-1918) situated on the west wall inside St Mary’s Church are found the names ‘Frederick Wyles’ and ‘John William Wyles’ (both are recorded on another WWI list calling for prayers of well-being on the south wall of the Church, with Frederick Wyles listed as a ‘Private’ in the ‘6th Lincolnshire Regiment’, and John William Wyles as a ‘Private’ in the ‘Bedfordshire Regiment’). There is a monument outside the main-gate of the Church for WWII (1939-1945) but contains no mention of anyone called ‘Wyles’.

​The Copy Court Rolls record that one ‘Sarah Elizabeth Wyles’ (aged 60) - described as a ‘Spinster’ from ‘Collyweston’ - applied for a Marriage License in 1936. The small Duddington Cemetery – which is situated at the south end of Duddington over the A43 main-road – contains the body of one ‘Agnes Sarah Wyles’ who was born on the 4.4.1878 and died on the 26th of September, 1949. Although the gravestone was not in the best of states, we could read the inscription ‘Rest after Weariness – Peace after pain.’

Although we found thirteen (13) individual (visible) graves for the Wyles family in the 1800s (I.e. ‘19th century’), the (incomplete) Burial Records for Duddington (gathered between 1816-1899) contain the details of ‘28 burials’ (with at least another ‘5’ mentioned but the details not provided).

*If we are correct to assume that ‘Mary Ann Wyles’ (1839-1917) was the wife of Thomas Wyles (1824-1887) - then as this ‘Thomas Wyles’ (son of Thomas and Elizabeth – the ‘Blacksmiths’) is our great, great, great (X3) grandfather, then it follows that his wife - ‘Mary Ann Wyles’ - is our great, great, great (X3) grandmother and is the last surviving member of our branch of the Wyles (as far as we know) to live in Duddington!  This means that our great grandfather – Archibald Wyles – was born in the same year that his grandfather - ‘Thomas Wyles’ - passed away (I.e. ‘1887’). As his grandfather died on the 30th of December, 1887, he could have known Archibald for a few months, but ‘Mary Ann Wyles’ - as his grandmother – could have known him for the next 30 years (with Mary dying just three months before Archibald left to join the Royal Navy Air Service in September, 1917, to fight in WWI)!